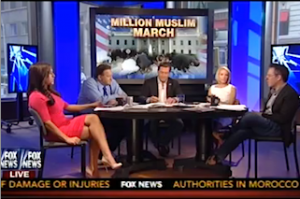 Friday afternoon, The Five picked up where Sean Hannity left off last night with their take on the planned “Million Muslim March” for the upcoming 12th anniversary of the September 11th attacks. The group unanimously denounced the event, calling it nothing more than a “9/11 truther convention.”

Andrea Tantaros opened the segment by revealing that Fox reached out to the Council on American-Islamic Relations (CAIR) for comment and the group said “they are not getting involved in this rally at all. They have nothing to do with it,” calling the event’s organizer MD Rabbi Alam “an anti-Semite whack job.”

“This isn’t a Muslim march, this is a 9/11 truther convention,” Eric Bolling said. “It’s obvious what they’re up to. They’re just trying to say we had nothing to do with 9/11, even though 19 radical Muslim Islamists flew planes into the buildings and killed 3,000 people.”

Dana Perino thought CAIR didn’t go far enough in their statement about the event, saying “they never disappoint.” Later she predicted that the march wouldn’t get more than 100 people to show up in Washington on September 11th. “Do I think more than 100 truthers will show up for this?” she asked. “No.”

“I have a feeling this whole idea sounded really good at the mosque,” Greg Gutfeld joked. He suggested they change the date. “Don’t have it on September 11th. And instead of marching, try melding,” he said, even offering up a slogan: “You can’t spell assimilate without Islam.”