The Five Rises Above The Politics, Gives Thoughtful Commemoration Of Bin Laden’s Death 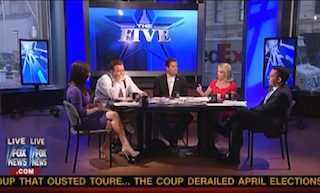 It looks like I owe an apology to the folks at The Five. After a long day of aggressive tweets about “spiking the football” from conservative bloggers, a Drudge Report headline that proudly accuses the President of “GLOATING IN AFGHANISTAN,” and reporters still asking Mitt Romney if he would have hypothetically killed Osama bin Laden in some kind of parallel universe where he was president, I expected more of the same from Fox News’ afternoon panel show. But, that’s not what I got. Instead, the show opened with a thoughtful and touching remembrance of that momentous day a yeah ago, a segment almost wholly devoid of the politics that seem to consume every waking second of an election year.

The hosts went through and discussed where they were one year ago and what the news meant to them. Greg Gutfeld discussed partying with strangers in Times Square. Dana Perino talked about ignoring the late night phone calls until she realized something big was up. Bob Beckel wonderer aloud if humans are better at remembering bad news than good news, comparing the day to when he learned President Kennedy had been shot or that the Challenger had exploded. And no one was talking about the election.

The only time it came up was when Perino asked the group if Obama’s trip to Afghanistan would have come off better had it not been clouded by the controversial ad his campaign had run, echoing her comments from yesterday morning. Gutfeld shrugged and pointed out that any president would probably have played the situation the same way. And then they were back to talking about what Bin Laden’s death meant to them.

Obviously, this is an election year and part of the appeal of the show is people debating different topics but, sometimes, a segment like this feels like a welcome breath of fresh air. Blame my cynicism for not seeing it coming.