The Five Sees ‘Parallels Between Benghazi And Boston’: Obama Administration ‘Bungled’ Both
VIDEO

The Five Sees ‘Parallels Between Benghazi And Boston’: Obama Administration ‘Bungled’ Both 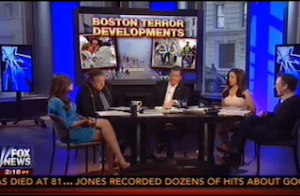 Is Boston the new Benghazi? That was message put forward Friday afternoon on Fox News’ The Five, less than two weeks after the devastating bombing at the Boston Marathon. During a discussion about the latest intelligence on the bombers’ motivation, co-host Andrea Tantaros said the “parallels between Benghazi and Boston are pretty unbelievable.”

The segment opened with Greg Gutfeld railing against the U.S. government for providing the Boston bombers “terror visas” because they are “fearful of accusations of profiling.” Gutfeld and his co-hosts went on to trash the Department of Justice for allowing the suspect in custody to be read his Miranda rights while the FBI was apparently still trying to question him under the public safety exception.

But the real bombshell came when Tantaros summed up what she felt is really going on with the Obama administration’s handling of the Boston case. Bringing up the “parallels between Benghazi and Boston,” she said “they bungled it leading up to both of these.” Extrapolating out her analogy, she added, “They blamed Benghazi on a video. This time they blamed it on misguided youth instead of saying radical Islam. Both are under ‘investigation’ so you can’t ask questions.” Finally, she said, with Benghazi, the Obama administration “blamed Romney.” Now, “they’re blaming the American people.”

Practically under his breath, Bob Beckel said, “let’s not bring the video back into this.” But other than that, Tantaros got nothing but nods of encouragement from her co-hosts. Instead, they just continued a discussion they started earlier in the week about the welfare payments the Tsarnaev brother allegedly received.

The Obama administration’s response to the attack on the U.S. consulate in Benghazi, Libya became a touchstone of conservative outrage at the height of 2012 presidential campaign. Since the attacks last week in Boston, there have been subtle suggestions of similarities between the two events on Fox News and elsewhere and Sen. Lindsey Graham‘s vocal opposition to Obama’s handling of the Boston case is reminiscent of his harsh criticism after Benghazi. But Tantaros was the first to lay out the “parallels” line by line, perhaps a sign that this narrative could persist in the days and weeks to come.