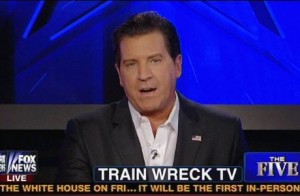 Fox News’ The Five opened their show with an in depth look at reality TV this afternoon. Eric Bolling began the extended segment with a look at Oxygen’s All My Babies’ Mamas (starring rapper Shawty Lo and his 11 children from 10 different women), which has already generated some controversy as “an attack on African-American families.” Bolling prefaced the report with a warning: “Before you go all liberal, progressive, race-baiter on me, understand this: train wreck TV is watchable. Train wreck TV rates through the roof and most importantly, train wreck TV is colorblind.”

After a montage of some of the more outrageous reality TV moments, Bolling asked, “Are we watching American culture and society disintegrate? Or are we just temporarily escaping the trials and tribulations of everyday struggles for a few minutes of six-pack abs, potato cannons and go juice?”

Greg Gutfeld does see a change in our entertainment culture saying, “what we used to have is aspirational entertainment. Father Knows Best is now ‘Father Who Doesn’t Even Know His Kids Names,’ because apparently, that’s more fun.”

As for Dana Perino, she is also not a fan of these shows adding, “I draw the line at humiliation… When we start humiliating people in order for others to make money…” In the same vein, Bob Beckel thinks that a show like All My Babies’ Mamas “is humiliating to the black community” but not necessarily in a different way than Here Comes Honey Boo Boo is “humiliating to the redneck community.”

Along the way, Perino compared the inexpensive, ratings-driven reality shows that make real-life stars out of deplorable people to critical-favorite dramas like Downton Abbey, Breaking Bad or Justified. Interestingly, Perino described those shows as some of the most conservative programs on television because they show “there’s consequences for your bad decisions.”

Gutfeld ultimately steered the discussion towards the idea that the lack of a traditional family structure leads to tragedy. “I don’t think you can deny the correlation between the decline of the intact family and dereliction of duty. And it comes down to — whether you’re looking at broken families or something like Newtown, the question is ‘where’s Daddy?’ And where there’s no Daddy, there’s nothing.” Whether that sentiment will be the primary takeaway from All My Babies’ Mamas is yet to be seen.