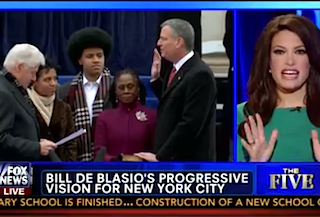 The hosts of Fox News’ The Five have never been big fans of (now former) New York City Mayor Mike Bloomberg. But now that his successor, the far more liberal Bill de Blasio, has been officially sworn in, they appear to be remembering how “great” Bloomberg was all along.

“I found it to just be very negative, not even acknowledging the tremendous accomplishments, and the progressiveness in New York City,” Kimberly Guilfoyle said, adding that the look on Bloomberg’s face from the front row “said it all.”

Dana Perino praised the billionaire Bloomberg for taking just $1 yearly as salary. “He did all these great things for New York City,” she said, while admitting that she and her co-hosts have “made fun of him” for some of the “lifestyle” things he tried. Still, she credited Bloomberg with keeping the crime rate down, preventing another terror attack and keeping the stock market up. “Then you have prepared speeches that insults him while he’s sitting there,” she said. “There’s just no grace, there’s no manners.”

“And he paid for the house that they’re going to live in now,” Guilfoyle added, referring to Gracie Mansion, which Bloomberg remodeled out of his own pocket. The de Blasio family is “going to move in and enjoy it,” she said. “Guess that’s not bad.”

While The Five has praised Bloomberg’s aggressive stop-and-frisk defense, they have spent far more time bashing his gun control campaign and using all variations of the “nanny state” attack to criticize programs like the soda ban and most recently his regulation of e-cigarettes. But now that they have de Blasio as their mayor, it seems Bloomberg doesn’t look so bad in the rear view mirror.