The Five Takes On ‘Audit The IRS’ Rally: The Tea Party Movement Is ‘Roaring Back To Life’
VIDEO

The Five Takes On ‘Audit The IRS’ Rally: The Tea Party Movement Is ‘Roaring Back To Life’ 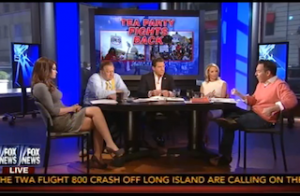 With the Tea Party Patriots holding its largest rally since 2010 in Washington today, with speeches from Glenn Beck, Michele Bachmann and more, The Five asked whether the tea party movement’s big comeback is finally underway. Will the IRS targeting scandal help propel more conservatives into office in the 2014 midterm elections or will the more progressive trends of 2012 continue?

Dana Perino began the segment by showing images from today’s “Audit the IRS” rally and noting that the tea party movement appears to be “roaring back to life.” And Eric Bolling agreed, saying that when you look at all of the “scandals” plaguing the Obama administration over the last few months, it’s inevitable that right-wing candidates will benefit. He went so far as to say that adding Republican seats in the House and Senate is “more important than winning the White House.”

“Resident skeptic” Bob Beckel, was, well, more skeptical, saying that the rally today represented the “fringe of the fringe” of the Republican Party and accused the organizers of trying to exaggerate the size of the crowd. “The tea party is not a very potent force this time around, I don’t think,” he said. “I don’t think, frankly, that they’re that big a deal. And the Republican mainstream is running away from them.”

Calling Beckel “so wrong,” Greg Gutfeld predicted that the IRS and other scandals would galvanize the right in 2014. Rather than viewing the tea party movement as a bunch of radicals, Gutfeld described them as “good people–the calmest, sweetest revolution probably ever, and they deserve the respect for being right for the past five years.”

“Bob, sorry to say, they’re back,” Kimberly Guilfoyle added, “and you know why they are significant? Because your side is afraid of them, otherwise why would they be targeting them with the IRS, auditing them, making sure they don’t get their tax exempt status? They are fearful They had impact on midterm elections and they will again because people are tired of the government abuse.”

Finally, Gutfeld predicted how the rest of the mainstream media would frame the tea party’s big comeback: “The tea party is the most dangerous group, just below the Taliban, NAMBLA and Maroon 5.” And, he said, if there’s one misspelled sign from today’s rally, The Daily Show will spend 20 minutes mocking that sign to make themselves feel smarter while ignoring the fundamental issue and the fundamental message.” Your move, John Oliver.