The Five Takes on Democrats for ‘Politicizing’ Navy Yard Shooting 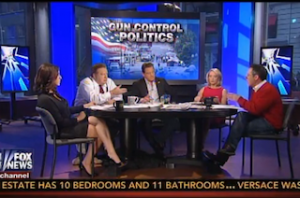 On Monday’s show, The Five mostly put aside their opinions and delivered an hour-long straight news report on the deadly Navy Yard mass shooting. But today, the partisan fight was back in the show, especially in a segment dedicated to what multiple co-hosts saw as the left’s attempts to “politicize” the tragedy by reviving the gun control debate.

Andrea Tantaros began by highlighting a statement put out by Sen. Dianne Feinstein (D-CA), a long-time supporter of stricter gun laws, that called on Congress to pass legislation that could help prevent mass shootings like this one from happening again the future.

Asked if he thought it was “appropriate” for Feinstein and others to advocate for stricter gun control laws on the same day that the shooting happened, Bob Beckel said “absolutely.” He asked why someone with known mental illness problems like Aaron Alexis was allowed to purchase a shotgun. “In this country, you can be a fruitcake like that, and buy a gun, and go shoot up 13 people,” Beckel said.

Meanwhile, Tantaros placed the blame on Vice President Joe Biden, who suggested people “buy a shotgun” instead of an assault rifle. She said it was a “messaging problem” that could continue to plague the vice president.

Eric Bolling appeared to be inadvertently arguing on the side of those who want stricter gun laws when he said Alexis “still had to have a background check” for the shotgun he purchased, assuming it was done legally. He said the main problem is that if someone checks into a mental institution in one state and then purchases a gun in another state, that information is not being properly shared. According to Bolling, the right is all for fixing that problem, they just weren’t for a “national gun registry,” which, of course, the Manchin-Toomey bill specifically prohibited.

Towards the end of the segment, the conversation turned towards the failure of the “mainstream media,” with Dana Perino calling it “despicable” that so many people went to sleep last night thinking Alexis had used an AR-15.

For the record, Bolling pointed out that “Piers Morgan, who has absolutely no idea what he’s talking about, perpetuated that myth.”