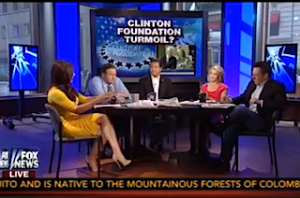 Thursday afternoon, The Five hosts turned their attention to the speculation surrounding Hillary Clinton’s potential 2016 presidential run and a recent New York Times story that exposed financial problems at the Clinton Foundation. The group wondered why this new information about the Clintons was leaking out now and urged Republicans not to “take the bait” and start attacking Hillary’s charitable works.

“I have a theory: this is classic Clinton,” Andrea Tantaros said. “Dump the info, take the dirty laundry to the friendly hometown laundromat–their hometown paper–get it out there. There’s nothing new in here. So what? They support celebrities, they run big deficits.”

Eric Bolling agreed, implying that somehow Clinton and the Times were working together to get this potential scandal “out of the way early” so it diminishes in people’s minds before 2016. But since, he said, the foundation will still be the “vehicle” for Clinton’s campaign, voters should know that “it’s wrought with cronyism, fake capitalism and a lot of paybacks to some questionable business ties.”

“I think it’s a trap,” Tantaros said. “They want Republicans to say look at you… trying to get rid of childhood obesity or AIDS in Africa. How dare you spend all that money? And they’re going to say, ‘you took the bait, GOP.”

Greg Gutfeld had a stronger reaction to the whole thing, saying, “This is like busting somebody for shoplifting when they have bodies out in the back. This is a victory for Hillary, taking the heat off the Benghazi cover-up, which is a huge story and a massive story that she was a part of, but as long as you focus on the really boring crap like this Clinton Foundation stuff… you stay away from the ugly stuff that could bring her down.”

But Bob Beckel saw only smooth sailing for Clinton from here on out. “This time around,” he said, “not only do the Democrats not have anybody who can challenge her, the Republicans don’t come close to having somebody to challenge her.”