The Five Asks: ‘Who Are These People’ Who Support Marijuana Legalization?
video

The Five Asks: ‘Who Are These People’ Who Support Marijuana Legalization? 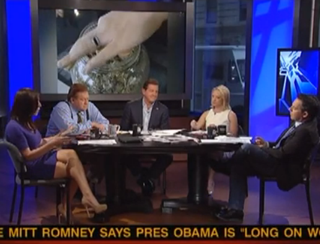 Dana Perino wasn’t very comfortable with the b-roll footage used to introduce a segment about marijuana on today’s The Five (namely, footage of someone actually smoking marijuana, on television), but got through it to ask the panel whether President Obama revealing an “evolved” position on the matter could help get out the vote. The panel was evenly split– with Greg Gutfeld and Bob Beckel seeing a possibility for support for marijuana legalization among enough of a population for it to make a difference, and Andrea Tantaros taking the stance that it would only help Mitt Romney.

RELATED: Sure, Some People Don’t Like Donald Trump, But Eric Bolling Thinks He ‘Represents The New GOP’

“This is a question about some of the most important states in the election, Colorado and Ohio, having an initiative on the ballot [to decriminalize marijuana,” Perino explained, meaning that there was a possibility that those coming out to vote in favor or against the initiative could be persuaded in one way or another by some approval or disapproval of someone on the ballot. Tantaros thought any support of marijuana decriminalization or legalization would help Romney given that anti-marijuana voters would be more enthused to vote for him and pro-marijuana voters (who Tantaros generalized were all “stoners”) would only be swayed if “some Obama supporters are giving joints at the polls, which Eric Holder would probably allow.”

Gutfeld joked that “it would help because you’d have to be high to vote for him at this point,” but then made the serious point that he believed we were a good five years from a “major leader com[ing] out, besides Gary Johnson,” coming out for support. Eric Bolling found the point “cute,” if only because he called New Mexico Governor Gary Johnson a “major leader,” though later added that he did believe a contingent of Republicans who had voted for Rep. Ron Paul and were only with Romney as the Republican nominee could be persuaded. Beckel, on his end, thought it was possible but not particularly beneficial to the President since he had already pulled a similar opinion change on gay married, and “I don’t think he has another one of those to vote for.”

Perino then chimed in with the fact that pro-legalization groups were fundraising significantly in key states, asking, “who are these people?” Gutfeld replied that there were many “smart people, a lot of libertarians” who would want to see the drug legalized, both for use and to “reduce drug use among teens” through regulation.