The Five Wonders Why SNL Can Mock Bush But Not Obama 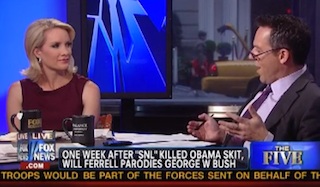 This weekend, Will Ferrell made a triumphant return to the Saturday Night Live stage and brought with him his impression of former President George W. Bush which he made famous for years on the show (and even for a limited run on Broadway!). Today, on The Five, the gang talked about the sketch with everyone giving it and Ferrell high marks. However, most of them found reason to complain that SNL doesn’t seem to have nearly as much fun making fun of President Obama.

That’s not exactly a surprising response from The Five. What I did enjoy about this segment is that it contained one of my favorite cable news tricks; the Segment That’s Not Actually About What The Tease Made It Seem Like It’s About.

Before the commercial break, the segment was teased as being about how SNL “censored” a writer who wrote about Obama but did a Bush sketch instead. However, once this segment started, the “censoring” was only mentioned offhand. Perhaps that’s because the story turned out to be completely false (as the writer himself, Jim Downey, told Mediaite last week). Yeah, no one got censored. But, sure, say that in the tease for this segment. And then have a chyron up the entire time reading “ONE WEEK AFTER ‘SNL’ KILLED OBAMA SKIT, WILL FERRELL PARODIES GEORGE W. BUSH.”

That’s fair and balanced. The balance being between what the hosts are actually talking about and some made up thing people can get outraged about.

But don’t think I’m just ragging on The Five here. I said this is one of my favorite cable news tricks because I literally see it about 20 times a day. Seriously, now that I’ve pointed it out, you won’t be able to miss it.

It’s just misleading. Almost as misleading as making the headline of a blog post about The Five discussing SNL and then instead writing a lengthy column complaining about conventions of television production.

Um…just watch the segment from Fox News below: