The Five‘s Andrea Tantaros: Attacking Obama For Being Cool Didn’t Work Before, Why Would It Work Now? 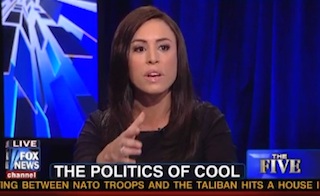 Yesterday, following President Obama’s late night slow jamming, Fox News’ The Five attempted to somehow morph into the underdogs in a bad teen movie, ripping Obama apart for being too cool. At the time, all of the conservative hosts agreed that being cool was bad and that star quarterback Obama didn’t deserve to be class president just because he’s dating a cheerleader. However, Andrea Tantaros was absent at the time and, today, she asked her hosts if they really thought that was such a smart tactic. Whether she was just playing devil’s advocate or not, some of her co-hosts seemed annoyed the question was being raised.

Using the flashy ad from Karl Rove’s SuperPAC as a jumping off point, Tantaros pointed out that Republicans tried a similar tact and ad in 2008 and that it didn’t work. Dana Perino, who was so passionately anti-cool yesterday, took umbrage at this, arguing that the ad wasn’t just successful, it was also prophetic. However, a few seconds later, Tantaros pointed out that Republicans tried the exact same thing when Bill Clinton was going on cool talk shows and, if my memory serves me, he ended up winning.

Bob Beckel, who also missed yesterday’s discussion, argued (after he made it clear that he didn’t like the idea of airing almost all of a Karl Rove ad without saying who made it) that Obama is cool and that it was a silly thing to attack him on it. Eric Bolling pointed out that kids respond to him while Greg Gutfeld responded by quipping that “kids are stupid.”

In the end, Gutfeld clarified yesterday’s segment, arguing that the problem wasn’t how cool Obama was, but that his appearance on late night TV shows demonstrate that he’s “not serious,” a horrible quality for a politician.