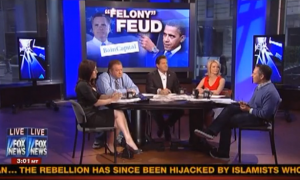 On Friday, the crew at The Five tackled the latest political outrage: the Mitt Romney-Bain Capital story that said Romney was at the company longer than he said he was. The co-hosts (save for Bob Beckel) took issue with President Obama‘s campaign suggesting that if Romney misrepresented his position on SEC filings, that could be a felony. Citing “overreach” and “desperation,” the mockery commenced.

“They really don’t want to talk about the economy now, do they?” Eric Bolling asked, before handing it off to Greg Gutfeld, who seemed somewhat amused by the whole thing amusing consider Obama is from Chicago. Chicago. You know, the city “where if every criminal wore an orange jumpsuit, the city would look like a giant bag of Cheetos.”

Andrea Tantaros called the ordeal “a stretch,” going on to note that “arming Mexican drug cartels” is what sounds like a felony to her. She then took a look at the Obama family tree, citing two relatives who were undocumented in this country. And then there’s Obama himself. Tantaros noted that in Dreams from My Father, Obama “talked about snorting cocaine, which is still criminal behavior. So, um yeah, I’d be careful to throw stones.”

Critics can’t have it both ways, Dana Perino elaborated: They can’t say Romney’s too weird and too Mormon and too squeaky clean, and then also say he’s a felon. Still in disbelief, Tantaros mocked the Obama campaign for accusing Romney of (gasp) having a job, of all things.

Beckel chimed in with a more serious tone, asserting, “Somebody did not tell the truth on this filing. Period.” A bit of back-and-forth ensued as Beckel insisted someone did something wrong, and that it’s wrong to misrepresent the Romney’s position at Bain. Unsurprisingly, Beckel didn’t have his colleagues convinced.