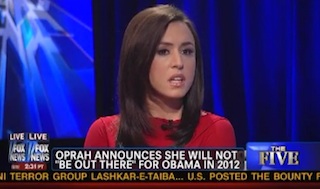 Today on The Five, the gang took time to review their good friend Sarah Palin’s guest hosting on The Today Show. Did they think she did a good job? Well, lets just say that their opinions were so unsurprising we’re not doing a post on them. However, in the midst of Eric Bolling’s effusive praise, he managed to segue to a discussion on Oprah Winfrey and he hosts discussed Winfrey’s support of President Obama as well as the troubles with her network OWN. Andrea Tantaros managed to combine the topics, theorizing that Winfrey’s Obama support hurt OWN in the long run.

“Do you think [Winfrey] took a business hit because of the decision to come out and endorse President Obama? Because I remember, when she did, there was a lot of people out there who didn’t like Oprah so politicized. They like her talking about which Spanks to buy and which is the healthiest yoga position.”

Most of Tantaros’ co-hosts rejected the theory, guessing that Winfrey’s spectacular run was just already about over when she branched out into the network.

However, it’s an interesting thought. In Tina Fey‘s memoir, Bossypants, she talks about how her SNL impression of Palin may have made her more visible than anything else, but it also seriously hurt her show 30 Rock‘s chances of becoming a more mainstream hit because some people were so offended that she’d dare mock Palin. And, in my personal experience, I’ve had absolutely infuriating arguments with commenters on this site where I try to persuade them that FX’s Louie is one of the best shows on television but they refuse to watch it because Louis C.K. once tweeted some mean jokes about the former Alaskan Governor.

Both those stories have to do with Palin, but this is a much broader issue. When I was having those Louie debates, I was stunned that people could be so blinded by their political allegiances, that they wouldn’t watch a critically acclaimed show that had absolutely nothing to do with politics. In their mind, if you say anything “liberal,” then all of your life’s output is instantly worthless. And lord knows that there are people on the other side of the coin who feel the same way.

On first glance, Tantaros’ theory sounds ridiculous. Oprah supported Obama so now people who have watched her for years will run away? The sad thing is, I believe there are people out there that feel that way. Not enough for it to be the number one cause for OWN’s failings. Hell, not even enough for it to be the number eight cause. But it definitely could have contributed.

When there are nonstop cable news shows analyzing how President Obama is an evil socialist plotting with Hollywood celebrities and the Russians to ruin America, then of course there are going to be some souls out there who are convinced he is bad.