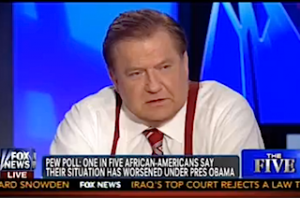 The Five opened its show Tuesday afternoon by looking ahead to tomorrow’s speech by President Obama, marking the 50th anniversary of Dr. Martin Luther King, Jr.’s “I Have a Dream” speech at the 1963 March on Washington. The conservative hosts were attempting to place blame on the president for how little racial progress the country has made since King’s day when Bob Beckel jumped in and began attacking all those “crackers in the south” who want to prevent African-Americans from voting.

Eric Bolling began listing statistics, showing that blacks are six times more likely to be incarcerated in federal prison and be a victim of homicide than whites. He noted that during Obama’s first four and half years, youth unemployment among African-Americans went from 34.5% to 41.5%.”

From there, Beckel steered the conversation to voting rights, saying the reason liberals care about voter ID laws is because “there’s a bunch of crackers in the south–“. He couldn’t get out the rest of his point, because all four of his co-hosts jumped all over him for the use of that controversial term to describe white people. Soon he was imploring them to “shut up” so he could get through his statement.

“I’ll shut up if you take back the cracker comment,” Bolling told him. “I know you didn’t mean it.” He later said he was trying to give his co-host “an out” for a term that’s “offensive like the ‘n-word.'”

Instead of taking it back, Beckel doubled down, saying, “In the counties, in certain parts of Texas and North Carolina where these new voting ID laws will disenfranchise blacks, they are crackers.” He made sure everyone understand that he was not calling everyone in the south “crackers” but rather just the people from the counties in question that are trying to impose voting restrictions.

If “anybody that’s for voter ID is a cracker,” Greg Gutfeld argued, then “that makes a lot of black people crackers.”

“You’re all friends of mine, I know you love me, and you’re trying to protect me because I made a statement about that,” Beckel responded. But he insisted that he would “continue to say this” because he believes that “without voter registration–any impediment on it to voting by blacks is a substantial foundation for black success in this country.”

“This Supreme Court’s out of date,” Beckel responded.