The Five’s Bob Beckel: ‘Bill O’Reilly Doesn’t Know Anything About The Black Community’ 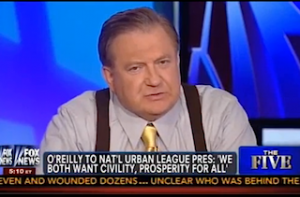 Wednesday afternoon, The Five took on Bill O’Reilly‘s recent foray into the conversation on race, with four of the co-hosts commending his bravery and Bob Beckel, always the outsider, slamming his Fox colleague. Beckel mocked O’Reilly for his lack of knowledge of what it’s like to live “in the black community.”

Eric Bolling introduced a clip of O’Reilly, who he said has been “fired up on the race debate,” talking to civil rights leader Marc Morial on his show last night. “I want Bill to know, I can’t be more excited of the fact he is taking this on by himself,” Beckel said once the clip ended, going heavy on the sarcasm. “Bill O’Reilly doesn’t know anything more about being in the black community than anybody who’s never been there.”

Dana Perino defended O’Reilly for using his “considerable platform” to “say some things that are uncomfortable to say in polite society” about race in America. “I think what O’Reilly did was, he ripped the band-aid off, and exposed the sore underneath.”

Echoing O’Reilly’s sentiments, Greg Gutfeld said, “every time somebody says we need to have a conversation about race, the translation is we must agree with you about it. If you were to talk about families, and self-reliance, that’s construed as racist. Expecting normal behavior is construed as bigoted by hucksters who make a living off this kind of hysteria.”

And Andrea Tantaros went after President Obama for “identifying” with the the black father who left him rather than the white mother who raised him. “He has an opportunity to step up as a role model, because he is one and he should and he’s missing his moment.”

When Beckel fought back, saying Obama “understood his life to be a black man in America at certain times with an undercurrent of racism,” Tantaros informed him, “That time has passed.”

“No, it has not,” Beckel responded.