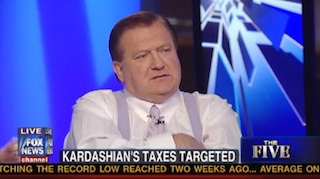 There is one strongly held belief of Fox News’ Bob Beckel that I agree with and support wholeheartedly and it has nothing to do with his politics. It’s his belief that absolutely nothing to do with Kim Kardashian should ever be discussed on a channel with “News” in the title. Today on The Five, the group tried to do a segment on how some blah blah group tried to blah blah Kim Kardashian about blah blah blah blah whatever and Beckel had the integrity to give that crap the same amount of respect I am now.

“I’m not going to talk about this person!” Beckel declared. “It’s a waste of time.”

The cruel Five producers actually attempted to get Beckel to tease the whole segment, something he refused to do saying that talking about “that woman” would lead to him breaking a New Year’s resolution. I’m not sure what resolution he’s referring to but I’m going to take a wild guess that it has to do with some of his on-air language.

For those that are interested (and God bless you if you are), the actual story had something to do with some liberal group making an ad arguing that Kardashian should pay more in taxes. And, in addition to Beckel’s act of civil disobedience, it appeared that the other hosts as well had a hard time getting into their usual “rich people are good for America” arguments when the subject was Kardashian. At one point, Andrea Tantaros accidentally said “poor Kim,” and you could almost hear a genuine shudder go through the table. Later, Dana Perino tried her best to make the segment about the rich in general and not just that woman who infests all our magazine covers for some reason.

The best moment came when guest host Brian Kilmeade tried to point out that Kim Kardashian had made a lot of money in a short amount of time and Beckel retorted that “So did Lassie.” Perino mentioned that Kardashian and the famous dog “got their start in totally different ways” and their were a number of chuckles around the group as no one wanted to make the obvious joke.

Where’s Greg Gutfeld when you need him?