The Five’s Bolling Charges Obama With Proposing Muslim Profiling: ‘If I Said That, I Would Be Accused Of Racism’ 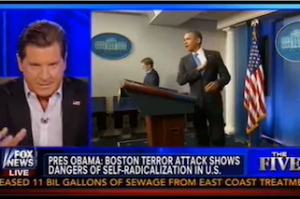 President Obama made one statement during his press conference this morning that struck ‘s Fox News’ Eric Bolling so much he had to play it back “three of four times” to see if he had really heard what he thought he did. During Tuesday afternoon’s edition of The Five, Bolling played the clip and asked his fellow co-hosts to react.

The comment came during the president’s answer to a question from CNN’s Jessica Yellin about the federal response to the terror attack in Boston. Obama suggested that there are more things the government do to prevent future attacks, such as “engaging with communities where there is a potential for self-radicalization of this sort.”

“Sounds like he is talking about profiling to me,” Bolling said, “and the communities he is referring to are the Muslim communities. Isn’t that profiling?” He added, “If I said that, I would be accused of being Islamophobic and racist.”

Juan Williams was the first to disagree with Bolling’s take on the president’s comment, saying “it’s not a secret that there’s a pattern of these attacks being tied to Muslims.” Instead of being “racist,” Williams thought what Obama said was “self-evident and smart.”

Meanwhile, Andrea Tantaros rejected Bolling’s theory, but for a completely different reason. “To me it was academic, liberal, mumbo jumbo,” she said. “‘We need to engage communities.’ Like Boston? The most liberal city in America? As if talking to them is going to stop them?”

So, while Bolling perhaps agreed with President Obama’s suggestion to “engage” with Muslim communities, but found it hypocritical for the president to suggest it, Tantaros apparently doesn’t think it’s worth talking to those communities at all.