The Five opened its Friday show by taking a look at President Obama’s “mishandling” of the Syria situation, and Russian President Vladimir Putin’s attempts to take the diplomatic lead. Looking at a pair of conspicuously chosen photos of the two men side by side, Eric Bolling asked, “Which one do you want leading your country?”

Bolling compared a “real leader” like President Ronald Reagan to Obama, who “put us in a ‘wussification,’ redistribution economy” before throwing the photos up on the screen: 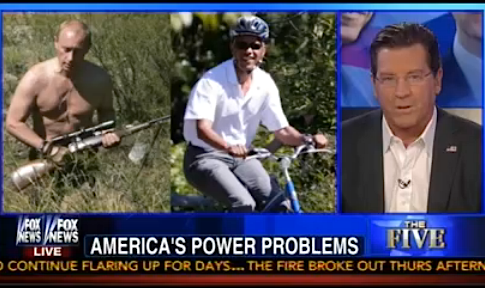 The other hosts couldn’t quite believe what they were seeing. “I’m going with the bike,” Dana Perino said. “You like the shirtless guy in the woods?” Greg Gutfeld asked. And Juan Williams said, “You like the made-up photo. You like the pretend photo.”

Steering the conversation back to the question at hand, Kimberly Guilfoyle asked, “Are people worried about our president taking some action?” Or, “are they going to say, ‘Listen the guy who’s actually making moves, that’s determining the course of events here and in the Middle East, is Putin.”

Perino described the situation as “embarrassing,” but at the same time Americans “don’t want to admit that it’s embarrassing.”

And while Williams could admit that Obama hasn’t put forth a “clear policy,” he asked, “Do I think it’s evidence of some kind of malfeasance or evidence that America is losing power? No. America is the most powerful country in the world.”