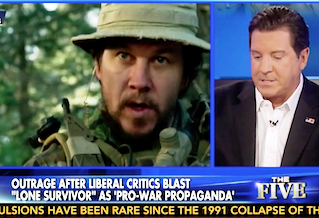 Peter Berg’s Lone Survivor, based on a book of the same name

by former Navy SEAL Marcus Luttrell has become a surprise hit at the January box office, thanks in part of sold-out screenings in states that tend to go red in presidential elections. And now, conservatives are fighting back against one writer from The Atlantic who called the film “pro-war” propaganda.

First, Fox’s Megyn Kelly discussed the criticism with Medal of Honor recipient Sergeant Dakota Meyer, who said that what some are “calling propaganda is the reality” for those who fight in the military. Today, The Five took on the charge, railing against those who would describe the film as “pro-war.”

He added that the narrative arc of the film, which tells the story of a deadly Navy SEALs mission in Afghanistan “doesn’t play well in liberal la la land, so they call it a pro-war propaganda movie, which is offensive, especially to the moms of the three SEALs who died there.”

While both Kelly and Bolling described multiple reports labeling the film “pro-war propaganda,” the primary source of the outrage appears to be Calum Marsh’s essay in The Atlantic, which argues that all war movies are inherently “pro-war.”

“If Peter Berg wants to make a film-length recruitment ad, that’s his prerogative,” Marsh writes. “But it’s important, then, to accept that the result is enthusiastically pro-war. When you make a film in which soldiers are paragons of excellence and the action they conduct is ruthless and exciting—in Berg’s world, naturally, the action is rip-roaring and amplified in slo-mo, almost pornographic in its excess—there is no other conclusion.”