The Five‘s Eric Bolling On Cain Leak: I’m Praying It Is Coming From The Left And Not Republicans 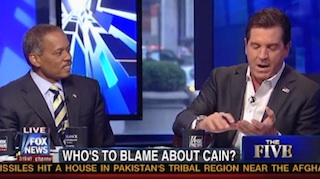 Not one response to the leak Herman Cain sexual harassment settlements has gone particularly well. However, while all of the race talk that flared up instantly might have seemed particularly unhealthy, it’s now looking like the most self-destructive comments came from the Cain campaign itself. Last night, Cain’s campaign manager Mark Block completely broke Ronald Reagan’s 11th Commandment by directly accusing Rick Perry’s campaign for the leak. This has not gone over well with many Conservatives. The reaction could best be summed up by The Five‘s Eric Bolling as he announced that he was “praying” that the leak actually came from the Left.

After watching Block’s uninspiring follow-up appearance from today, Bolling described his feelings as such:

BOLLING: And I’m hoping, I’m praying that [the leak is] coming from someone on the Left or someone who doesn’t like Herman Cain. Only for this-

JUAN WILLIAMS: You are always political!

Everyone was in agreement (and has been since last night) that, were the leak to be definitively proven to have come from Perry then, yes, it would hurt him. However, if it’s not 100% proven, then this is going to hurt Cain quite a bit, perhaps more than the content of the leak itself.