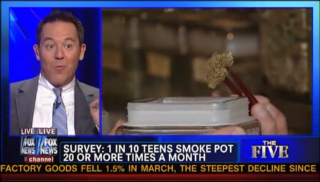 On Wednesday’s edition of The Five, Greg Gutfeld took on the rest of his co-panelists in a heated discussion over marijuana legalization. Co-host Bob Beckel introduced the segment, describing what he sees as frightening statistics:

[We have] an epidemic growing in America. One in ten teenagers now smoke marijuana at least 20 times a month. That was 19 percent of teens that used pot in 2008 and it’s now 27 percent as of 2011. […] Let me just say this about marijuana […] here is the problem: it is becoming so much more powerful a drug than it used to be because of cross-pollenization of it, because of medical marijuana, the use is everywhere. And if anyone believes that strong marijuana does not lead to cocaine use, I’d be happy to give you a tutorial on it.

I think I’ll pass on the tutorial, Mr. Beckel. But the scientific community is actually undecided on whether marijuana use actually leads to cocaine use. Usually it’s a logical fallacy to assume that because smoked pot before they used coke, then pot was a gateway drug. It’s more likely that the people who try pot in the first place are more likely to use cocaine than people who don’t try marijuana at all.

All of this increase has occurred under prohibition. The reason why is dealers don’t ask for IDs. However, licensed operators and regulators do. Imagine if alcohol was illegal. No one who check for ID’s for booze. So you have this really weird irony: In America, it’s easier to score illegal pot than legal booze simply because it’s regulated. You can also regulate the strength, the power of the pot. It’s easier now for kids to get high because it’s banned. Once it’s legal, then you will lose your license if you give pot to a kid.

Exactly right. Students consistently say it is easier to score pot than to obtain alcohol underage. And think more about what Gutfeld said: Jack Daniels is sold in a well-lit establishment where above-ground, licensed businessmen want to maintain good standing with the law and not sell to minors. Sure, busts happen. But it’s much more out in the open than, say, a shifty guy selling your kid marijuana on the abandoned railroad tracks. When you bring a business out into the open (this, by the way, also applies to prostitution) you go much further to eliminate the crime and other negative associations.

Co-host Eric Bolling interjects with the expertise of a “father of a 13-year-old,” saying that if we allowed a “pot dispensary on every corner there will be more and more pot smokers.” To which Gutfeld repeats “you ask for ID” and exclaims that what Bolling said is not a fact.

Other panelists Kimberly Guilfoyle and Dana Perino jumped in, adding vaguely anti-marijuana voices to the debate, as Gutfeld continued to repeat his point that in a legal market, we’d be able to card for sales of marijuana.

Yes, he came off as a broken record, but Gutfeld is absolutely correct. Much of the objection to legal marijuana is an emotional one, based on little fact.

As an advocate for legal marijuana (and a non-smoker myself), I’m thankful for a voice like Gutfeld’s.

Check out the entire pot debate below, via Fox News: