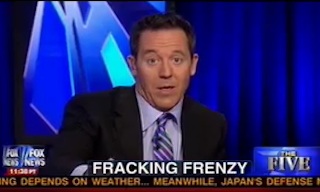 On Fox News’s The Five Monday evening, Greg Gutfeld enthusiastically lit into actor Matt Damon for his participation in a new anti-fracking film, The Promised Land.

Environmentalism and green do-gooderism has always been a favorite piñata of the snarky Libertarian, and he once called the “celebrity environmentalist” the “nexus of evil.”

“So Matt Damon is making an anti-fracking movie. Yay! John Krasinksi will star, no doubt also an expert on this cruel practice that extracts natural gas. Boy, I hope he makes goofy faces like he does on The Office. Adorable!” Gutfeld said. “But like every film these days it’s just a remake. In the spirit of destroying an industry it harkens back to The China Syndrome, that shrill anti-nuke screed from the ’70s. If you think culture doesn’t shape politics, remember that nuclear power is still recovering from that celebrity-driven smear. Which means you can blame Hollywood for our dependence on oil right now.”

Props to Gutfeld for knowing a little bit of history behind the environmental movement, keenly acknowledging the impact of The China Syndrome on our political landscape, but he conveniently leaves out the fact that the Three Mile Island nuclear accident, by fluke, coincided with the release of the film and worked to amplify anti-nuke sentiment.

Also, isn’t it a bit of a stretch to blame a movie opposing nuclear power on our dependence on oil? Oil only provides 1% of our electricity needs and a whopping 94% of our transportation sector. Gutfeld himself once called electric vehicles “stupid little cars.”

Gutfeld continued his acerbic screed against Damon and ‘greenies’:

“So why hate fracking?” Gutfeld asked. “Isn’t it just a horizontal windmill shattering rocks instead of birds? Well, the greenies hate it because it works. Yeah, a funny thing happened on the way to Solyndra: fracking put us toward a path towards energy independence making the green efforts look kind of silly.”

“And Matt knows we can’t have that. Then America wouldn’t be the bad guy anymore. This one fact alone would eliminate the only major villain in today’s movies. True, with drilling there can be environmental side effects. But there are environmental side effects to everything, including film making. Research has shown that the film industry pollutes like mad thanks to the idling trucks, special effects and set construction. But that’s Hollywood, so never mind.”

“Anyway, I think someone must have pumped sand and water through Damon’s head because he certainly exudes enough natural gas to power a small city,” Gutfeld concluded.

Gutfeld certainly has a point that Hollywood pollutes, but the industry has actually taken great strides in recent years to make their productions a lot more environmentally-friendly. Instead of accusing Damon and Hollywood of hypocrisy, Gutfeld should perhaps focus his efforts on encouraging pro-natural gas filmmakers to produce their own counter-programming. Off the top of my head, may I suggest, Frack To The Future, starring a natural-gas powered DeLorean — and er, Kirk Cameron?

Watch Gutfeld’s comments on Damon below via Fox News: