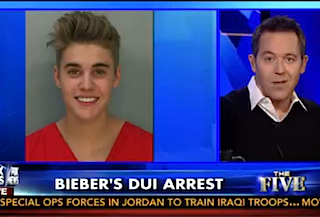 If Fox’s The Five was going to lead Thursday’s show with the Justin Bieber arrest story, then co-host Greg Gutfeld was going to do whatever he could to “shoehorn” in President Barack Obama. During his opening monologue, Gutfeld found a way to link tween girl fanaticism over the pop star to the way the press treats the president.

“After smoking pot all day and drinking beer and popping pills, mop-top moron Justin Bieber went drag racing and landed in jail this morning,” Gutfeld began. After showing his surprisingly attractive-looking mugshot, the host suggested Bieber “quit being a bad boy while you still have teeth.”

Then came the rhetorical gymnastics:

“The real culprit: the mindset of the teenage girl that suspends critical thinking, replacing it with mindless euphoria driven by hormones and a desire for acceptance, but enough about Obama. True his poll numbers have a Bieber-esque quality, adored by people who pay more attention to dimples than direction. It’s a direction we can predict, for like Bieber, Obama has no friendly speed bumps, no trusted critical eye to stop the decline with helpful device. They’re too scared to hurt the pinup’s feelings, which is why there’s nothing to see here, because we’ve all seen it before.”

After he was finished, Gutfeld admitted he just “had to shoehorn Obama into the Bieber story.” And when Bob Beckel called it an “interesting connection, to say the least,” Gutfeld remarked he was “kind of proud of it.”