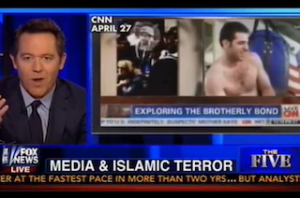 Greg Gutfeld kicked off Monday afternoon’s edition of The Five on Fox News by taking aim at cable news competitor CNN for its portrayal of the Boston Marathon bombing suspects over the last couple of weeks. Following the deadly attacks, Gutfeld accused the media of “humanizing the heathens” and “giving the defense lawyers a head start.”

In his opening monologue, Gutfeld singled out a CNN special titled “Exploring the Brotherly Bond” for glorifying the older Tsarnaev brother by showing shirtless photos of him in the boxing ring. “What is with CNN’s obsession with beef cake bombers?” Gutfeld asked in disbelief. “Does Ted Turner have a fetish for men in Everlast trunks?” He added, “exploring the brotherly bonds of terrorists is like looking at the health benefits of cyanide or the calming effect of nerve gas.”

Gutfeld suggested that CNN would never explore the “mother-son” bond of the Newtown shooter and his mother. “With gun violence, the media predetermines that the guns are evil. When terror strikes, the media humanizes the heathens, giving the defense lawyers a head start.” He also implied that the media’s soft treatment of the younger Boston suspect he influenced the government’s decision not to try him as an “enemy combatant.” “If you just got to know him a little better,” he said, “you would know he would be a blast.”

Dana Perino agreed that the “psychoanalysis” of the suspects by the media is not helping us prevent a similar attack from happening again. She also criticized the coverage for “insinuating that it’s our fault” for not helping the brother assimilate into our society.

Meanwhile, Eric Bolling went after CBS’ 60 Minutes interviewing friends of Dzhokhar Tsarnaev who said he was a “great guy” and had never attended a mosque. “What’s with the sympathy for the bad guys?”

Finally, Gutfeld brought up Rep. Keith Ellison‘s appearance on NBC’s Meet The Press this past Sunday in which the congressman drew analogies between surveillance of the Muslim community following the bombings and Japanese internment camps during World War II. Bob Beckel, who has been under fire since he suggested a moratorium on giving Muslims student visas, disagreed with Ellison’s analogy. “It is not profiling when you have a group of people constantly being the source of these attacks,” he said. “That’s using the evidence you have before you and saying this is where we need to go first.”