The Five’s Greg Gutfeld: Planned Parenthood Official Deserves ‘A Medal From The KKK’ 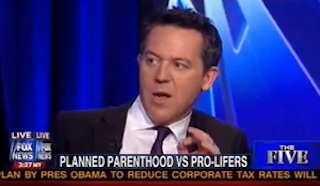 A video of Ludwig Gaines, the African American leadership and engagement director for Planned Parenthood, has gone viral on conservative websites after CNS News interviewed him and he accused hypocritical pro-lifers of pretending to care about black children before they’re born but not caring at all after. When Bob Beckel began the segment on the video for The Five, he expected Greg Gutfeld to throw out some outrage and was surprised when his co-host only called Gaines a “bozo.” However, Gutfeld didn’t disappoint for long. Within a minute, he was explaining that Gaines deserved a medal from the KKK:

“[Gaines] is confusing an opportunity for life with the promise of dependency. This is a very old, cliched argument. Pro-life doesn’t mean you have to provide the life with cradle to grave services for somebody who’s born. Blacks, 33% of abortions, they’re 13% of the population. Racists would love that statistic. And he’s defending that statistic. He should get a medal from the KKK!”

Beckel argued that, while he thought Gaines’ comment was over the line, there was truth to the fact that the people introducing the legislation Gaines was complaining about (which would ban abortions for fetuses at 20 weeks gestation or older) have “consistently voted against programs that do aid these kids.