The Five’s Tantaros Blasts Obama: ‘War On Terror’ Won’t Be Over Until America Is ‘Ruled By Muslims’
VIDEO

The Five’s Tantaros Blasts Obama: ‘War On Terror’ Won’t Be Over Until America Is ‘Ruled By Muslims’ 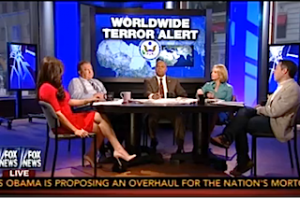 Tuesday afternoon, The Five took on the recently heightened global terror alert, hitting President Obama for claiming the “War on Terror” is coming to a close while al Qaeda continues to plan attacks against the United States. “If al Qaeda is on the run,” host Andrea Tantaros asked, “how are they able to be calling and ordering terror attacks? And doesn’t this administration owe us a bit of answer now since they’ve been telling us we’re not at war with Islam?”

Greg Gutfeld chalked the entire situation up to oil, saying the solution “rhymes with fracking.” The lesson, he said, is “the United States needs to have our own fuel and ensure our own safety, then we don’t have to deal with this.”

And Dana Perino stood up for the Muslim world, to a degree, saying, “like there’s radicals here, you can find radicals in any movement.” She added, “if every Muslim was a radical, then the world would be a real different place.”

Tantaros shot back at these sentiments as “understatements” saying “this is bigger than oil” and everything else. “They want to kill us. They’re not going to stop until everybody in this country is a Muslim or is ruled by Muslims, no matter how nice we are, and they’re radicalizing younger and younger.”

After concurring that Muslim radicalization goes back at least as far to the days of Hitler, David Webb pulled out a number he should “should scare” his fellow co-hosts. “If only 10% of Muslims worldwide are radicalized,” he said, “it is the largest standing army in the globe’s history.” Webb did not cite any actual statistics to support his “scary” claim.