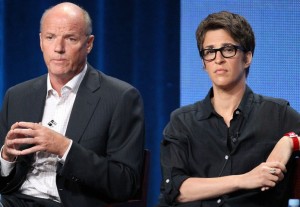 Being in the Top 4 of most categories is usually a good thing. But when the horse race consists of, well…four horses…that may a problem.

Conservative media, of course, is reporting the news with the same glee anytime the letters I-R-S are mentioned in consecutive order.

After all, the Lean Forward network—now at a seven-year ratings low— is as loathed by the far right as much as Fox News is despised by the far left. As a result, it’s schadenfraude on steroids from Newsbusters to Breitbart to Drudge.

But to use this column to simply point out details around the obvious would be a tedious, repetitive exercise (See: MSNBC is struggling mightily, here are the numbers, film at 11). So instead, let’s use this space to explore how to fix the network’s programming issues via unsolicited (and humble) advice to Mr. Phil Griffin, MSNBC President.

Note: These will be reality-based suggestions. Ideology/political positions of the network will not be discussed (perhaps a column for another time). Budget/production costs, talent availability, contracts, etc., will all be taken into consideration. So no, I can’t just tell Griffin to hire Jon Stewart for $20 million annually and put him at 8:00 PM. And no, I can’t have him fire his entire primetime lineup, become centrist or right, and start anew.

First, let’s set the table around what’s going wrong from a programming perspective…

When you think of MSNBC, two “Ms” come to mind: Matthews and Maddow (with apologies to Mika). The former has been a network staple since 1999 via Hardball. But throughout its 14-year run, the program has never performed well in the ratings for reasons I suspect some members of our comments section will articulate clearly and candidly below.

Understand this: The 67-year-old former Carter speechwriter just signed a long-term contract extension, so simply getting rid of him isn’t an option. And with the midterms coming up next year, and when taking into account all of the unintentional comedy and unbridled passion Matthews brings, termination shouldn’t be an option anyway. He’s a unique talent…for better or worse.

Still, giving Matthews two hours of programming per day (a live 5:00PM show and a repeat at 7:00 PM) is the definition of insanity (doing the same thing over and over again and expecting a different result). For example, in the key 25-54 demo, Matthews recently hasn’t even drawn 100,000 viewers in either his 5:00 or 7:00 PM slot. To put that number into context, Fox’s The Five breaks 300,000 in the same demo regularly at 5:00 PM. And to make matters worse, May wasn’t exactly a quiet news month: there was still plenty of political meat to chew on (albeit, Obama-unfriendly meat) via big controversies surrounding the IRS, AP/James Rosen/Eric Holder and Benghazi.

But Matthews struggling to attract a big audience is nothing new, which begs the question: Why does Griffin continue to repeat a show that doesn’t perform? It’s like giving Mark Sanchez eight quarters just to throw more interceptions (for those who don’t follow the NFL, Google “Sanchez + interceptions + bench” for a better understanding).

The other “M” (Maddow) is a different story. She’s the undisputed face, voice and star of MSNBC. But like everyone else on the channel, she hasn’t been able to weather this horrific stretch for the network. Overall, the Oxford Rhodes Scholar has seen her ratings drop alarmingly since beating Sean Hannity in the demo a handful of times since the election (a once-positive sign that likely prompted Griffin’s ill-fated declaration of MSNBC overtaking Fox by the end of 2013).

In short, Maddow’s drop can be directly pointed to three factors:

1) Scandals even the President’s staunchest supporters are having trouble defending
2) The lack of a major Republican bogeyman to demonize (Romney, Bush, Cheney, Palin, etc.)
3) The decision to create an 8:00 PM show called All In with Chris Hayes

Since the first two factors are out of MSNBC’s control, let’s look at factor #3 in the form of:

Chris Hayes…the 8:00 PM host who may ultimately be mentioned in the same breath as The Chevy Chase Show. As you may have heard, Hayes’ numbers have been abysmal (the lowest ratings MSNBC has seen at 8:00 PM since 2006; recently beaten by Bill O’Reilly by a 10-to-1 margin). Consequently, Maddow’s once-respectable ratings have taken a direct hit partially due to the small audiences Hayes is handing her.

So here’s what we have…

• A struggling show at 5:00 PM being repeated at 7:00 PM
• A somewhat-new 8:00 PM show (Hayes) weighing down the network’s primetime lineup and especially its biggest star (Maddow)
• A politics-only network falling to 4th place with no major election in sight to right the ship

To remedy these issues without dropping a ton of dough on new talent, Mr. Griffin should do the following:

So here’s what the new lineup would look like from 5:00 PM to 10:00 PM…all without Griffin having to bring in a free agent (like Keith Olbermann, which I’m told will never happen) and without spending a penny more:

For those who advocate sending Hayes back to weekend mornings or off the reservation entirely, know this: Griffin simply won’t do it. Why? Because it will reflect directly on him for putting Hayes in the big leagues in the first place. Moving All In to 5:00 PM helps him save face without killing the original idea altogether (and while fans of All In are correct that the show is only two months old, it’s hard to envision how to reverse the impression Hayes has made to this point (See: awkward, tedious, still speaks too quickly, too eclectic/random in topic selection).

The first is to simply go the Shawshank route. Lockup, MSNBC’s prison documentary series, currently gets better numbers for MSNBC on weekend nights than the aforementioned weekday primetime lineup. And since it’s simply a matter of finding a tape in a vault and hitting a play button, it’s a cheap and easy alternative.

Put together a compelling Best of MSNBC Today 60-minute highlight program to run at 10:00 PM.

What were the top sound bites, confrontations, analysis, and features from Morning Joe to The Cycle to Hardball to Maddow to O’Donnell? Here it is…all in one neat package. And with some creative editing and a steady host to steer the ship, this would be a great way for MSNBC viewers to catch whatever they missed that day (and for pennies to produce).

Host: Contessa Brewer, still a member of the NBC family via a local New York affiliate.

The old saying in poker is that we can’t change the cards we are dealt, just how we play the hand.

Just a few months ago, riding high off Mr. Obama’s reelection and seeing Fox News and CNN struggling, Phil Griffin felt he held the primetime equivalent of a straight flush.

Instead, it’s been another kind of flush when it comes to MSNBC’s ratings.

But fixing MSNBC may not mean making a massive, expensive overhaul.

For now, changing how to play the hand may be the best and only pragmatic option…