White House: “Let’s Not Pretend Fox Is a News Network The Way CNN Is”
VIDEO

White House: “Let’s Not Pretend Fox Is a News Network The Way CNN Is” 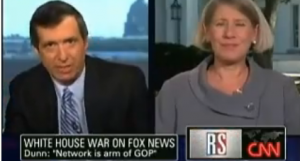 The gloves are off. Anita Dunn went on Howard Kurtz‘s Reliable Sources on CNN this morning to air some of her specific grievances with mainstream media practices, spending most of her time criticizing Fox News.

Dunn — officially the White House communications director and unofficially the field marshall of Obama’s Call ‘Em Out Patrol — really cut to the chase when it came time to talk talking about FNC, which has continuously chafed the current administration.

She began her interview by touching on the “reflexive negativity” of conservative commentators, pointing to the politically motivated reaction to Obama’s involvement with — and the much-celebrated failure of — Chicago’s Olympic bid, and the negative spin surrounding Obama’s Nobel Peace Prize.

“What I think is fair to say about Fox — and certainly the way we view it — is that it really is more of a wing of the Republican party,” Dunn told Kurtz.

Kurtz presented a response from FNC Senior V.P. Michael Clemente to the White House earlier in the week to Dunn that said, “An increasing number of viewers are relying on Fox News for both news and opinion. And the average news consumer can certainly distinguish between the A section of a newspaper and the editorial page, which is what our programming represents.”

Dunn disagreed that there was a clear line between Fox’s objective reporting and opinion journalism, although she did restate that certain Fox reporters are legitimate journalists:

Update: And then there’s this. Michael Scherer posted to Swampland about a promo that ran during Reliable Sources this morning, touting Anderson Cooper as the left’s answer to Fox News:

The ironic part came later, during the commercial break. All morning, CNN has been intermittently running a promo for Anderson Cooper 360, a show that has long billed itself as a classic straight news program with an investigative front man who digs “beyond the headlines” with “many points of view, so you can make up your own mind.” The new promo, by contrast, consists of a woman’s voice, pitching Cooper’s show as, essentially, a liberal alternative to Fox News: “I’m a lifelong Democrat,” she says, “and that’s why I watch Anderson Cooper.” Hmmm. The voice goes on to say that Cooper is the person she can turn to hold “right wing” conservatives accountable. Cooper is not exactly aiming for the political middle ground here.