The Insidious Justification For Media Silence On Benghazi And IRS Scandals: Conservatives Cared Too Much
video

The Insidious Justification For Media Silence On Benghazi And IRS Scandals: Conservatives Cared Too Much 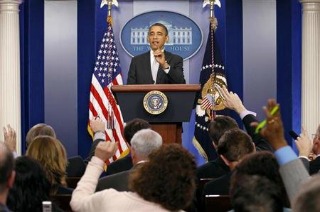 There is no conspiracy. The imagined cabal of political journalists and editors colluding in their respective conference rooms to bury news items which are potentially damaging to President Barack Obama or his liberal allies is just that – imagined. There is, however, like-think in the political press that results in an institutional culture which views with suspicion any story that conservative media outlets deem worthy of added scrutiny. Some of the media’s most influential members are beginning to realize that their own biases have shielded the administration from criticism. This was not intentional, but it was nevertheless the result of a kneejerk dismissal of stories that conservatives exhibited too much enthusiasm over. Acknowledging this condition is the first step to correcting it. The backlash from within the media by its most trusted voices has begun.

Over the weekend, The National Review’s Jim Geraghty artfully forced Bloomberg View columnist Margaret Carlson to acknowledge the fact that the media was dismissive of the Benghazi scandal simply because conservative outlets thought the story merited examination. On CNN’s Reliable Sources, Geraghty accused the mainstream press of brushing off the Benghazi scandal because those “wacky guys” in the conservative media saw significant political ramifications for the Obama administration in the story.

“Those ‘wacky guys’ did go too far,” Carlson insisted. “They have been looking for Watergate for so long that, you know, they went too far on Benghazi.”

“They were making it into this huge, impeachable – and some used the word impeachable offense – without much,” Carlson added.

“It didn’t seem like they had a sense of urgency about it, a real sense of outrage,” said NBC News Chief White House Correspondent Chuck Todd on MSNBC’s Morning Joe on Monday. No, he was not talking about the revelations last week regarding a coordinated effort by high ranking members of the Obama administration to confuse and complicate the real reasons behind the attack on an American consulate in Benghazi in 2012. Todd was talking about the brewing scandal surrounding the years in which members of the Internal Revenue Service targeted conservative groups.

“And then look at the reaction of the entire Democratic Party,” Todd continued. “Why aren’t there more Democrats jumping on this? This is outrageous no matter what political party you are.”

“This story has more legs politically in 2014 than Benghazi,” Todd concluded. This final disclaimer should be interpreted as more an effort at self-defense than an example of honest political analysis.

Todd has spent the better part of the last week downplaying the political relevance of the notion that members of the State Department, with the likely knowledge of former Secretary of State Hillary Clinton, facilitated that maintenance of the White House’s political narrative that Al Qaeda had been neutralized just weeks before a presidential election.

“For this conspiracy theory that some people believe is out there — that the White House was trying to downplay a terrorist attack because of the election — then they did a really poor job of it,” Todd said last week of the Benghazi scandal. “Because within three or four days, it was pretty clear to the entire world this was a terrorist attack from a group that had some sort of extremist Al Qaeda ties.”

For Todd, the fact that an alleged cover-up failed is evidence enough that no cover-up existed. Of course, this blatant effort to exonerate the White House is deeply fallacious.

This was the same NBC News Chief White House Correspondent who had recently called the notion that some media outlets were not honest brokers when it comes to stories that conservatives believe can damage Democrats a “mythology.” This the same NBC reporter who called U.N. Ambassador Susan Rice, whose nomination as the next secretary of state was scuttled by her being sent out to disseminate the false pretense behind the Benghazi attack, a “victim” of a culture in Washington that is “overly reactive” to conservative “media outlets.”

Todd’s enthusiasm for the scandal erupting over the IRS’s targeting of pro-GOP groups is as much an admission that the press got Benghazi wrong as anything else. They are guilty of the same dismissal of the IRS story which was first identified in the conservative media outlet The Blaze in February, 2012. It is a justification for the overcompensation that is coming in what will be the media’s dogged pursuit of the IRS story.

The coming weeks are likely to demonstrate that the political media is nowhere near as protective of the White House as they are protective of themselves and their institution. Burned on Benghazi, the press seems prepared to overcorrect with a tireless investigation of the IRS scandal. But while the investigation into IRS’s targeting of GOP groups is likely to go cold before it even reaches the Treasury Department, the cover-up of the administration’s response to the Benghazi attacks implicates members of the Cabinet of the President of the United States.

The media, shamed, is a cornered animal and the White House will be the on the receiving end of scrutiny yet unseen. But the conservative media would be wrong to declare victory and withdraw. There remain more questions than answers for both the Benghazi and IRS scandals. For the first time in a long time, the political press appears unwilling to dismiss those questions as conservative obsessions.