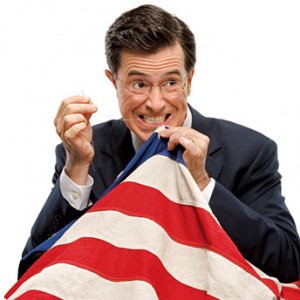 Throughout the O’Reilly Factor last night, Bill O’Reilly repeatedly said that no liberal could draw a crowd like Glenn Beck did this weekend. Well, if the internet has its say, O’Reilly may get a chance to see his theory put to the test. The most popular post on Reddit right now is a request for Stephen Colbert to host his own rally in the nation’s capital. Is that in itself news? No but, hey, if this post helps in any way make it happen, so be it!

“I was woken in the middle of the night by this(along with the sound of my cat getting ready to pee on the rug).
Think about it. It’ll be just like Colbert’s mockery of GW Bush at the 2006 White House Correspondent’s Dinner, but 500,000 people will be able to participate with him. We’ll all stay totally in character as teabaggers. The kid with the microphone that interviews all the idiots at these things can come by and we’ll ramble into his microphone.
This would be the high water mark of American satire. Half a million people pretending to suspend all rational thought in unison. Perfect harmony. It’ll feel like San Francisco in the late 60s, only we won’t be able to get any acid.”

Yeah, the Redditor is a bit hyperbolic and his use of “teabagger” is tacky, but that doesn’t mean he didn’t have a good idea. However, as great as this sounds, it’s doubtful that Colbert would be champing at the bit to do it. While Beck repeatedly made a point of making his rally as apolitical as possible, gathering a massive amount of people to listen to speeches in Washington DC will always be a political move and that’s something that both Colbert (and Comedy Central compatriot Jon Stewart) have purposefully tried to distance themselves from. Besides, Beck made his rally mostly about religious faith and there’s only so much that Colbert the entertainer (who is a devout Christian in real life) can do to make that funny. Besides, Beck’s crowds set a high bar and, as O’Reilly has shown, any number less than what the Restoring Honor rally garnered would be seen as a defeat.

Still though, if anyone can clear these potential mine fields, it’s Colbert and his amazing staff. So, do you think this is a good idea? Who would Colbert’s fellow speakers be?