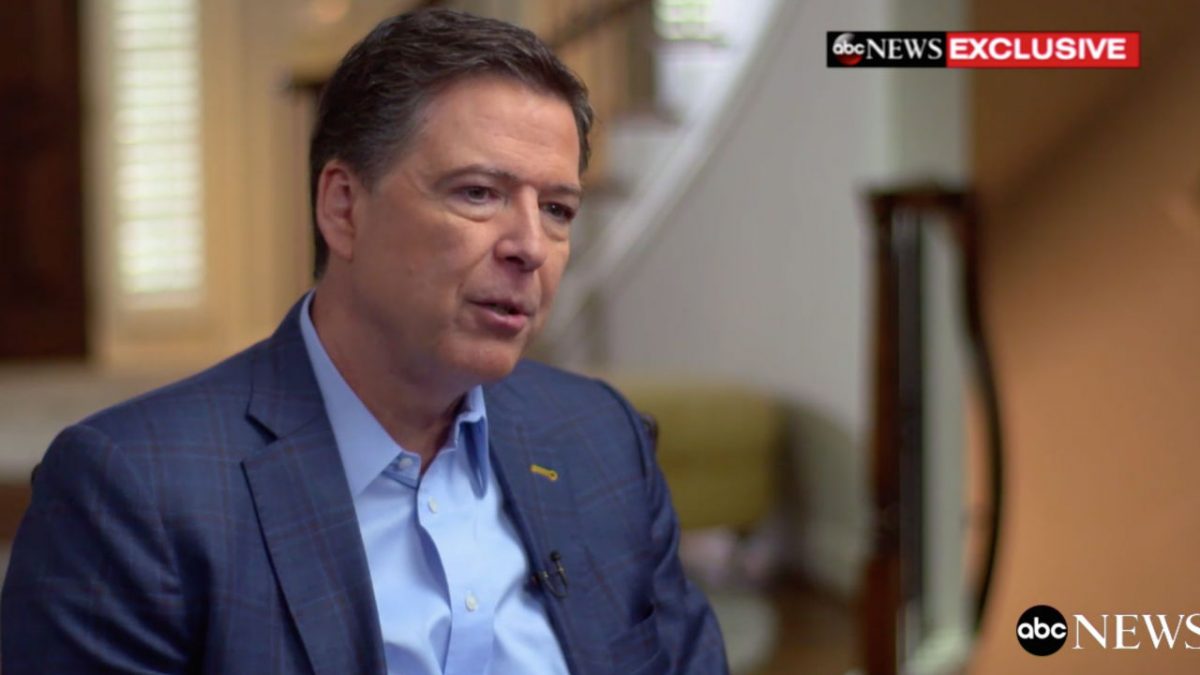 In an different era, one far more substantive and less partisan than today’s pathetic mess, last night’s ABC interview with former FBI Director James Comey would have essentially ended the Trump presidency. However, largely because we live in a period so utterly flawed as to have produced Donald Trump as our president in the first place, it will not be.

If any other president in our history had fired an FBI Director of their own party, whom they had just praised on the campaign trail and effectively re-hired, who was investigating their own campaign for having colluded with a foreign adversary, and then that person gave the utterly devastating interview that Comey just did, it would have caused a total collapse in that president’s political support and set the stage for his removal.

Comey was extremely credible in laying out the case that, based on his own interaction with him, Trump is “morally unfit” to serve as president. He painted a vivid picture of Trump as a “mob boss” who was clearly trying co-op the head of the FBI for his own personal and selfish protection, and a pathological liar whose entire existence is “untethered to truth.”

He even went so far as to say that he thinks it is quite possible that the Russians have, in fact, compromised Trump via the infamous/mythical “pee tape” (Trump’s bizarre reaction to the possibility, as described by Comey, may be the best evidence yet that the tape may really exist, though I still have my doubts). And he made a strong case that Trump obstructed justice when he got Comey alone to tell him he “hopes” the FBI Director could let the Michael Flynn investigation go.

Comey, of course, is not a perfect spokesperson in this matter. He was fired, in humiliating fashion, from his dream job by the president and so “many people”—as Trump might say—will also presume some sort of vendetta on his part.

He also has made several highly questionable decisions during the course of the last two years. To his credit, he seemed to have been very introspective about whether he really made the right calls and, while somewhat defensive at times, in general was very willing to take responsibility for what might have been well-intentioned, but wrong-headed mistakes.

My general take on Comey is that, just as was implied by George Stephanopoulos’ last question, he is indeed in “love with his own virtue.” I see him as an extremely honest and principled man, but someone who is also prone to egotistical grandstanding because he simply can’t resist showing off his integrity.

In this sense, Trump and Comey are so lacking in common personality traits and values that it is not a stretch to say that they are almost from to entirely different species. Their relationship was, in retrospect, inevitably doomed to failure.

Trump and Comey are so dissimilar that, in a very weird way, I actually think Comey inadvertently misled Trump into thinking that he was willing to “play ball” and accept his “mob rules.” Comey made a couple of statements to Trump—most notably agreeing to give him “honest loyalty”—which may have been the result of Comey fearing too much the prospect of upsetting Trump and getting himself fired. Trump, because the concept of upholding  principles and standards in completely foreign to him, seemingly misinterpreted Comey, only to then immediately fire him once he finally figured out that the FBI Director was not really on his team.

For many reasons, I do not expect the Comey interviews and book, which will likely be commercial successes, to change very much politically. Comey was fired almost a year ago and in this extremely short attention-span age, that makes him very old news to majority of the population who isn’t obsessed with the daily headlines.

And books, which not that long ago ruled how news narratives are set, no longer pack much of a political punch. They are just too long and boring for the vast majority of modern Americans and have been replaced by tweets, which are obviously a much more reliable manner of getting to the bottom of important and complicated matters.

On top of that, our politics and media are now so completely fractured that events which used to induce massive earthquakes causing instant seismic shifts in the landscape, are now reduced to minor tremors. No leader in the Republican Party is going abandon Trump over what Comey is saying, partly because there will be absolutely no pressure from Fox News, the Drudge Report, or talk radio to so. In fact, largely because Trump has set up the battle with Comey as a bit of a loyalty test, the opposite will be case and Comey will, disgracefully, have his character assassinated by the state-run media.

So, in the end, not much is likely to change and the path for removing Trump from office prematurely, almost no matter what Robert Mueller comes up with, still seems pretty much nonexistent. Comey himself seemed resigned to this reality when in his interview he rather passionately made the case that, if America wants to really be who we think we are, then we the people must replace Trump at the ballot box.

Unless the Democrats can magically produce a decent candidate to beat him, if Comey thought he was nauseous after the 2016 election, he better find some good medication to help him get through 2020.