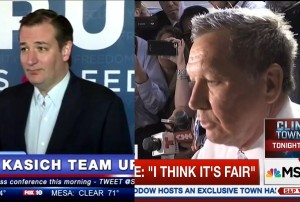 There isn’t enough hot buttered popcorn at an Orville Redenbacher plant to get liberals through the Cannonball Run-meets-The Road Warrior extravaganza that is the 2016 Republican presidential primary contest, and we’ve just reached another delicious set piece in that epic. On Sunday, Ted Cruz and John Kasich announced a deal to help each other try and spoil Donald Trump‘s chances at achieving 1237 delegates by essentially throwing several big games to each other.

The punchline is that as quickly as it came together, that deal fell apart, with Cruz telling reporters that Kasich was “pulling out of Indiana” while Kasich was telling reporters that his Indiana supporters “ought to vote for me!” Donald Trump, meanwhile, has been having even more of a field day than usual beating the snot out of these guys over it, a de-snotting that they both richly deserve.

That’s because even if their pact had held, even if Kasich had resisted the urge to campaign for Indiana votes and Cruz had resisted the urge to oversell the deal, it would have backfired on them anyway, because nobody likes that guy. You know the one, the guy who searches the rule book for a way to disqualify the guy who beat him fair and square, then points and smugly says “The bylaws are quite clear, you know.”

Think of it this way. Let’s say the New York Jets are in contention for a wild card spot, and on the last day of the season, they’re playing the last-place Miami Dolphins. Now let’s say the Dolphins and the Jets are allowed to cut a deal whereby the Dolphins let the Jets win in order to improve their standing in a tie-breaker. They announce the deal, eliminate some other deserving team, and get into the playoffs. How do you think that goes over, even with Jets fans?

Now think about how that game would have played out without a deal. It’s the last game of the season for Miami, they’re in last place, they’re probably going to rest their first-stringers and get their heads beat in anyway, and get a high draft pick. The difference in this scenario is that nobody thinks the Jets and the Dolphins are crummy little rat-f*ckers.

In the case of Cruz and Kasich, they could have rested their first string in states where the other had a better chance, and achieved about the same results, but now, all they have done is revealed themselves to be underhanded losers who can’t even stick to their own underhanded deal. It’s the worst of all worlds for them, and a yuge win for Trump. Ted Cruz can call Trump a “sore loser” at press conferences all he likes, but it rings a little hollow when he’s got blood coming out of his ears and tears streaking his swollen face.

What Cruz and Kasich have now done is to ensure that even if they manage to keep Trump from getting the nomination, neither of them will get it either. If someone is going to make the case that Donald Trump will be an electoral disaster for the Republican Party, it cannot be one of the guys who got his ass handed to him by Trump. Nobody likes that guy.