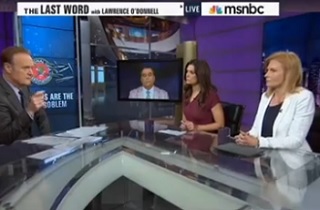 On Wednesday night’s The Last Word, host Lawrence O’Donnell played the 911 tape from Tuesday’s school shooting in Decatur, Georgia, and rightly praised the heroic efforts of aptly-named school clerk Antoinette Tuff, who showed incredible poise under unbelievable pressure. Then, Lawrence tossed the conversation to his panel, which resulted in some of the dumbest shit I’ve ever heard from a liberal panel on the subject of gun control.

I make that very important clarification, because compared to what comes out of conservative talk-holes on the subject of guns, this was a regular Mensa meeting, but when the good guys are messing up, it’s especially important to point it out.

Lawrence, for his part, was mostly on point, heaping praise on Antoinette Tuff for the way she talked shooter Michael Brandon Hill down, and correctly noting that “the NRA has made sure that the aspiring murderers are equipped with the best weapons,” but then everything went terribly wrong.

MSNBC.com’s Frank Smyth started off well by opining that Ms. Tuff “puts the National Rifle Association, Clint Eastwood, and Dirty Harry all to shame,” and even though Dirty Harry and Clint Eastwood are the same person, I was willing to go along with that. Then, he said “They’ve peddled this myth that only a good guy with a gun can stop a bad guy with a gun, and this proves that is not the case.”

This is where Lawrence should have stopped him and said, “No, this doesn’t prove that, the fact that effective gun regulations keep guns away from bad guys in the first place proves that.”

Instead, Smyth continued, “There are cases when an active shooter needs to be actively stopped, but there are very few actual cases where that occurred. and this demonstrates there are other approaches to public safety in our communities and schools that needs to be talked about and pursued.”

Smyth is correct that active shooters are almost never put down by a “good guy with a gun,” at least not before they’ve done all of their killing, and when the police do show up, as Lawrence noted, the NRA ensures that they’re often outgunned, but he’s answering that rarity with something else that never happens: a killer being talked down by a Jedi school clerk.

The Cycle co-host Krystal Ball sort of pointed this out, saying “God bless Antoinette Tuff, what an incredible woman. We can’t always count on there being an Antoinette Tuff to be in the school, to be able to make that call,” and added that “It is unfortunate, that we have a system where guns are so prevalent that they can show up, a mentally disturbed person with an AK-47, and have to rely on this.”

Nice recovery, and Krystal wasn’t even mean about it, because she’s way nicer than I am.

Then, The Guardian‘s Ana Marie Cox waded in by responding to Lawrence’s question about the shooter’s 500 rounds of ammunition and ready access to an assault weapon by suggesting that “we should train teachers to do stuff like what Antoinette Tuff did.”

Yes, that’s a great idea, why don’t we also offer classes in Vulcan mind-meld while we’re at it? Not one professional police negotiator in a hundred could have done what she did, but that’s where we’ll direct our energy? We might as well spend money training lightning to strike these guys. How Lawrence managed to find two people to endorse this idiocy is almost as great a miracle as Antoinette Tuff.

As a parent, I would hate to think that protecting our schools boils down to a choice between arming every stressed-out teacher, janitor, and hall monitor with a Glock, and just hoping we can get school shooters who are good listeners. Personally, I have no problem with trained police officers guarding our schools, if legislators are willing to pay for it.

Finally, Lawrence pointed out that, for those Georgia parents, “it is something of a miracle, it is luck that their kids came home safely,” and Ana Marie Cox responded that it was “providence,” that he she didn’t “believe it was just luck,” that “it sounds to me like there was a reason that Antoinette Tuff was there.”

Now, I know that this is the sort of thing that people say all the time, but it pissed me off, because by saying that God, or whomever, put Antoinette Tuff there to protect those kids, you’re also saying that God what, abandoned those 20 kids in Newtown? I don’t begrudge anyone their faith, and the comfort and wisdom it can bring, but the idea that God put his thumb on the scale for these kids, and not those, is offensive. If anyone is getting in on the gun problem in this country, it’s the other guy.