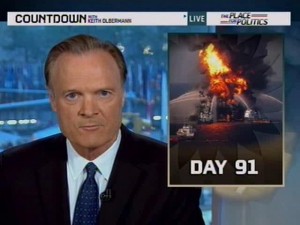 Lawrence O’Donnell‘s future 10pmET show with MSNBC now has a name and a premiere date.

The Last Word will premiere September 27, putting MSNBC in the same category with CNN and Fox News with three prime time hours of original programming.

MSNBC President Phil Griffin made the announcement at the network’s TCA session in Los Angeles today. It was first reported by TVNewser.

From the MSNBC release, Griffin says, “Lawrence is one of the rare hosts in cable news who has been in the room when policy is created. His background is an amazing asset to our primetime lineup.”

O’Donnell has not just been a regular guest host of Countdown with Keith Olbermann – finishing up two weeks at the gig tonight – but he also is an Emmy-award winning executive producer and writer of NBC’s The West Wing.

“The Last Word with Lawrence O’Donnell” will premiere Monday, Sept. 27 on MSNBC, 10-11 p.m. ET. MSNBC President Phil Griffin announced the premiere date and title of the program this afternoon at the Television Critics Association session in Los Angeles. “The Last Word” will reach back into O’Donnell’s extraordinary background in politics, entertainment and news, providing the last word on the biggest issues and most compelling stories of the day.

“Lawrence is one of the rare hosts in cable news who has been in the room when policy is created. His background is an amazing asset to our primetime lineup, and I can’t wait for it to debut,” said Griffin.

O’Donnell has been a MSNBC political analyst since the network’s launch in 1996 and has been the regular guest host for “Countdown with Keith Olbermann.” He has also guest hosted for “Hardball with Chris Matthews,” “The Ed Show” and “The Rachel Maddow Show.”

From 1989 through 1992, O’Donnell served as Senior Advisor to Senator Daniel Patrick Moynihan. In 1992, he was the Chief of Staff to the Senate Committee on the Environment and Public Works. From 1993 through 1995 he was the Chief of Staff of the Senate Finance Committee. He first began working with Sen. Moynihan as Director of Communications in the Senator’s 1988 re-election campaign.

A writer prior to entering politics and government, O’Donnell published the book Deadly Force (1983), which was adapted as a CBS movie in 1986. He has written essays and articles for several publications, including The New York Times, Washington Post, Los Angeles Times, New York, People, Spy and Boston Magazine. O’Donnell has also appeared on NBC News’ “Today,” “Good Morning America,” “Nightline,” “Charlie Rose” and several other programs. Suffolk University awarded O’Donnell an honorary degree, Doctor of Humane Letters, in 2001.