The Macy’s Thanksgiving Day Parade: What You Don’t See On TV

The Macy’s Thanksgiving Day Parade: What You Don’t See On TV 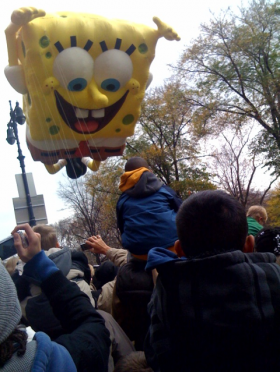 For the past two years, I’ve made a critical mistake for a New York City resident – not insisting that my guests arrive no sooner than noon on the day of Thanksgiving. What happens, then, is that they invariably want to go see the Macy’s parade live and in person, with the days leading up to today peppered with light-hearted comments about waking up at 6 a.m. and hoping that the weather isn’t too Arctic. So, sure enough – up this morning at 6:30 (that extra half hour required a lot of negotiation), and up to the west side of Central Park.

About a block from my house, the warning signs — nice weather and small clumps of people headed west. By the time we hit the Park, we were simply fish in a stream, poking our heads out of the crowd to make sure we were being carried where we wanted to go. And, right at that moment, I realized I needed to provide this guide to the world.

1. It is crowded.
Ridiculously so. You see the crowds on TV, of course, but it can’t capture what the scene is really like. Some compare it to Times Square at New Year’s, but there’s a key difference.

Those most impacted by this are also the parade’s main audience – children. This means that they’re quickly hoisted onto parents’ shoulders, aggravating those behind them and any pre-existing back conditions.

It also means that, about an hour into the thing, a steady stream of what can only be described as Bad Parents™ give in to their childrens’ whining and try to push their way to the front. No one likes this, including the children, since they never make it all the way there.

True story: last year I nearly came to blows with an overzealous father who, annoyed at my refusal to humor his ugly, ugly child, tried to shove me out of the way. Happy holidays!

3. No one at the parade knows who is on the floats.
On TV, the announcers can spend the 10 minutes required to explain all about whatever terrible Disney band is riding the firefighters float. On the street the only info you get is on a banner carried before them. A banner carried at street level.

4. You never see any performances.
I’ll admit – this is a positive. With the exception of those actually in Herald Square (a group comprised of 42,000 Macy’s executives, other bigwigs, and the two hard-luck cases who are the only ones interviewed), the bands and troupes never really do much but walk. Nor is there any obvious apparatus that would allow them to perform at the quality you hear on TV – so they instead use a process I call “lip-synching”.

Also, the performances at Herald Square make the whole line stop moving, meaning we all wait, staring at dour clowns for ten minutes, just so you all can go to the bathroom while a teenaged crooner entertains your daughters. So to speak.

The notable exceptions to the no performance rule, of course, are marching bands (who march) and cheer squads (who cheer). The cheers we heard this year: “Macy’s! Thanksgiving Day! Parade!” and “USA!” You, by staying home, missed this.

5. It’s not a good pick-up joint.
This year, we were behind a group of unusually tall Mormons, one of whom, with a Tintin haircut, decided to try and pick up on one of the cheerleaders stalled in front of us. A particular one of the several hundred.

His ultimate strategy was to fling a card with information about the Mormon faith (and his name) somewhat in her direction. He missed of course, hitting someone further down the line in the back of the head. (Later, as we made our way home, I saw someone pick the card up and read it – victory snatched from the jaws of defeat for the Latter Day Saints.)

Now, the last and most annoying fact:

6. When you get home, the parade is still on TV.
Depending on how cruel your house guests are, you may end up watching most of the thing for a second time.

My recommendation: go do something else. Perhaps there’s a new religion you’ve been meaning to learn about?