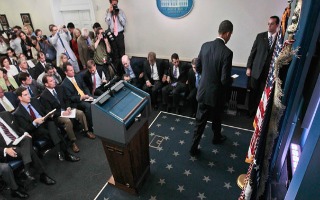 One week after the first presidential debate, the political environment continues to shift in unpredictable ways since that one-sided event. Mitt Romney has received a deserved bounce in the polls – however, conservatives should temper their enthusiasm. While the national trackers have registered a slight lead for Romney among likely voters, the polls of states like Ohio – which has been and remains peculiarly resistant to the Republican message this cycle – still show Obama with a slight lead. But if Republicans should be concerned, Democrats should be terrified. President Barack Obama’s campaign has responded to the newfound adversity he faced after his debate loss with a stunning lack of competency. What is even more revealing about the political earthquake that has occurred since the debates, the media has stopped filling in the blanks for team Obama.

Indeed, Democratic National Committee Communications Director Brad Woodhouse summed up the Democratic position succinctly by saying, “last night, if Mitt Romney was talking, he was lying.” The lies were so numerous that they could not even be detailed individually. Obama was so stunned by the myriad lies that he just could not respond. He was shellshocked.

Indeed, there were some distinct factual inaccuracies laid out by Romney at the debate. One that vexes me is his claim that the president “signed no new free trade agreements” in his first term. He signed three in October 2011 with South Korea, Columbia and Panama. But there is room to criticize the president here – those agreements were long ago agreed to and the Congress had them ready for Obama’s signature many months before they were signed. The way Romney went about that criticism invited media scorn.

But the usual rabid fact checkers were muted now. The Obama campaign’s scattershot hit no target directly, and the media did not pick up the slack. There was no rapidly mobilization by the press to detail Romney’s factual inaccuracies – rather, the focus of the media was almost exclusively on the president’s performance. The shock of the moment had not yet subsided.

The president’s campaign shifted focus then, not to fact checking Mitt Romney, but to his show of disrespect for the beloved, iconic Big Bird. The Obama campaign worked lines about Sesame Street, Elmo and Big Bird into every stump speech. They cut an ad lampooning Romney’s desire to cut back on subsidies to PBS while ignoring malevolent Wall Street traders (all of those criminals cited were prosecuted during the Bush administration).

But the media did not follow up. There were no in-depth interviews with the parents of children who had benefited from PBS programming. There was no side-by-side comparisons between the real debt and deficit drivers in the federal budget compared with the pittance that PBS programming receives. There was, instead, a palpable sense of embarrassment among members of the media over the Obama campaign’s embrace of the Big Bird strategy.

Stalwart Obama defender Chris Matthews and his panel guests mocked the Big Bird ad, even going so far as to suggest the ad was “Mickey Mouse.” Amateur hour. Democratic strategist Bob Shrum was asked if this was a strong way to frame a closing argument in the closing weeks of a campaign. He replied tersely, “No.”

Gibbs signaled that, in spite of public requests by the producers of Sesame Street for the Obama campaign to take the ad featuring their characters down, the campaign had no intention of doing so. To do that at this juncture would signal that they knew they have made a mistake, and thus far the Obama White House has shown a significant aversion to admitting fault.

The media has shown a conspicuous lack of resolution to continue defending the administration. But if embarrassment over Big Bird is one thing, the rapidly unfolding scandal surrounding America’s failure to safeguard its diplomats in North Africa is quite another. As the controversy surrounding what the administration knew and when, and why they told the press something quite different regarding the attacks in Libya, is serious and has the potential to be a game-changing election issue. The trickle of new and damning information out of the State Department is a headache for the administration today – but as Americans focus on foreign policy ahead of the final presidential debate on the 22nd, this scandal could become a nightmare for the Obama administration.

The media has shown a willingness to let the chips fall where they may when it comes to finishing the White House’s sentences for them. This is a significant and unexpected development, and it should horrify the Obama campaign. They may have squandered their greatest asset in the last week. The end of the media’s infatuation with Obama may be the greatest casualty of the debate.

UPDATE: A reader reminds me that the free trade agreements the president signed were negotiated primarily under the Bush administration. Therefore, Romney was correct that Obama has not signed any “new” trade agreements. This is enough to merit at least a “mostly false” from the nation’s dubious fact checking industry, but their silence illustrates that they may be rethinking their position.