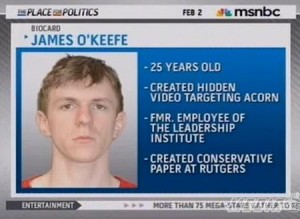 A Pew survey that shows MSNBC spent six times as much coverage on the James O’Keefe story as other outlets is being touted as evidence that the cable news network might have it in for the pimp-suited independent filmmaker. Just as likely, though, is that the other media outlets shied away from the story due to their complicity with the O’Keefe-as-journalist meme, and out of fear of being embarrassed again.

That fear may be behind MSNBC’s new reticence to tell it like it is with O’Keefe.

Since David Shuster‘s over-exuberant Twitter war with O’Keefe, Andrew Breitbart has been on a bold offensive, again trying to paint his protege as a crusading victim of the legitimate media. The strategy appears to be working.

On last night’s Countdown, Keith Olbermann conceded a major point of contention in O’Keefe’s defense – the notion that he thought “jammed” phone lines meant that they were malfunctioning, not busy. Some might call that a ridiculous notion, yet it’s key to O’Keefe’s narrative that he was just checkin’ up on the Senator’s phones in service to his lofty concern for constituents.

Today, I caught Shuster interviewing attorney Paul Callan about the O’Keefe case, and Shuster let his expert get away with what seemed far rosier prognosis that what had earlier been reported. While many on the right have criticized Shuster for continuing to cover the story after being reprimanded for “inappropriate” tweets, perhaps he has compromised himself in the other direction.

Right off the bat, Shuster downgrades O’Keefe from previous accusations to that of a “trespasser,” and he and his expert set off on a completely uncritical examination of O’Keefe’s version of the story. When Shuster cleverly wonders if O’Keefe is slandering Senator Mary Landrieu by characterizing Medicaid concessions as a bribe, the expert says it would be hard to prove malice. Really? Even with an FBI report that says O’Keefe and co. gained access to a federal building with malicious intent?

Then, Callan opines that a jury might be sympathetic to O’Keefe because he was “well-intentioned.” Shuster lets it fly by, even as later in the interview, Callan says you’d have to consider what their intent was once in the building.

According to the FBI, O’Keefe’s hardhats tried to gain access to the telephone closet. Unless they were going to leave a box of chocolates in there, it’s a near-impossible sale that these were the acts of civic-minded, if overly enthusiastic, youngsters. Neither Shuster nor his expert even brings up this fact, or the fact that O’Keefe hasn’t even tried to explain it. More broadly, neither of them challenges O’Keefe’s assertion that he was trying to get to the truth by creating fictional scenarios, something that O’Keefe admitted himself last night on Hannity. If O’Keefe’s actual prosecutor is this weak, he’s going to end up with an apology and a cash settlement.

The media was badly embarrassed by O’Keefe’s ACORN story, but for many of the wrong reasons — mostly, they allowed themselves to be shamed by another fake journalist, instead of focusing on James O’Keefe’s tainted process and its tainted work product.

Now, that failure has created embarrassment anew, and while MSNBC had clean hands in the first case, it appears they are allowing Shuster’s misstep, and Andrew Breitbart’s influence to force them to pull their punches.