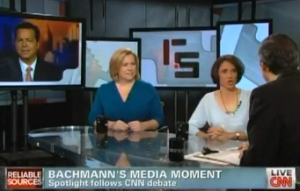 It seemed a lot of people recognized that Republican Congresswoman Michele Bachmann all of a sudden started getting favorable news coverage, a phenomenon that left Howard Kurtz scratching his head this morning on Reliable Sources. Kurtz asked his panel, “why was this a collective newsflash ‘hey, she’s not so crazy'” after she did pretty well in the debate?

There shouldn’t be much shock that journalists believed the “media caricature” of Bachmann, both because it was perpetuated so frequently by many in the media who enjoyed exploiting her past historical gaffes, but also because, as Jon Stewart just described this morning, there tends to be a bias towards “sensationalism and laziness” in the media. In other words, the picture of Bachmann being crazy and unintelligent, regardless if true, is too exciting to ignore, and journalists were generally lazy or uninterested in determining whether or not she actually had any intellectual firepower behind her sometimes outlandish statements.

The very fact that just a few months ago Chris Matthews was nightly referring to Bachmann as a “balloon-head”, and many other commentators would similarly talk dismissively of Bachmann and Sarah Palin as not credible political figures, goes a long way towards suggesting why it was hard for them to be taken seriously. In the media echo chamber, it’s difficult for your one voice, no matter how intelligent, to disprove thousands of other voices saying you’re an idiot.

Yet with everyone’s undivided attention last week at the debates, Bachmann capitalized on a rare opportunity to change her media narrative. Whether it was simply because the media as a whole was remorseful for persecuting Palin for so long (doubtful) or because every other Republican presidential candidate was so boring and uninspiring by comparison (more likely), journalists listened directly to Bachmann and have now rewarded her with the distinction of being considered a serious and even formidable candidate for President. And with Matthews himself leading the charge of praising Bachmann, it seems many now realize that she couldn’t ever possibly be as bad as how, prior to the debates, she was so often described.