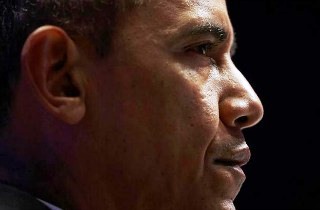 When Winston Churchill descended on a college campus in Fulton, Missouri, in March of 1946, he was already a revered figure in the United States. But the former British prime minister, who served as a symbol of stoic resistance to Nazi aggression throughout the Second World War, did not come to revel in the West’s victories as his audience had hoped.

From Stettin to Trieste, he warned, “an iron curtain has descended across the Continent.”

The speech, widely regarded today as a prophetic warning about the threat posed by the Soviet Union, was not well-received.

The Chicago Sun said his remarks were “poisonous.” The New York Times reprinted an interview in Pravda in which Joseph Stalin said Churchill’s remarks represented “a call to war with the Soviet Union.” Seeing Churchill’s warnings as an implicit rebuke of the newly established United Nations, New Yorkers protested Churchill outside the hotel where he stayed on route back to England. “Winnie, Winnie, go away, UNO is here to stay,” they chanted.

Churchill’s Iron Curtain speech grew in the public’s estimation over the years as events quickly proved that his call to action had been prescient. War-weary Americans dislike bad news, but they disapprove of being misled even more.

History is cyclical. Following an extended period of atypical peace and global cooperation after the end of the Cold War, facilitated by American largesse and unchallenged military ubiquity, Americans are once again confronted with the perennial realities of great power politics. Sensing an opportunity in a destabilized Ukraine, Moscow mounted a military incursion into foreign territory, installed a puppet government, held a sham plebiscite, and redrew the borders of Europe. Appealing to pretexts eerily reminiscent of those cited by the Reich, Russia maintains that it was forced to annex a neighboring province in order to protect ethnic Russians there from non-existent threats.

The abrupt end of the world’s vacation from history comes at a moment when the international environment is again weary of foreign engagements. Following the end of the global war on terror, a conflict in which nearly every Western power participated, the guarantors of the post-Cold War order are again exhausted.

Barack Obama’s very presidency is a product of that weariness. He was vaulted to the Democratic nomination and then the White House by virtue of his opposition to projects like the War in Iraq and his pledges to retrench American forces and retreat from the battlegrounds of Asia. It is a quirk of history that he is now forced to tackle this great and growing threat to global stability.

While the president would certainly prefer to heed the polls which show Americans and Europeans are deeply suspicious of the notion that they have a responsibility to resolve the conflict in Ukraine, Obama has not abdicated his role as leader of the free world. Appearing before an audience in Brussels on Wednesday, amid a hastily convened summit of Western nations, Obama delivered an unnecessarily flowery address which he surely hopes will be etched into the history books in much the same way Churchill’s unpopular speech in Fulton was.

The president’s speech spanned generations and continents as he sought to remind the audience of their responsibility to history. Summoning the dormant spirits of duty and obligation, he invoked the trials faced by doughboys in the trenches of Europe and South Africans struggling to bring down the Apartheid government. A handful of modern observers might view these struggles of the 20th century as merely preamble, a sort of adolescent stage of human development which has given way to the enlightened period we now inhabit. But this was unlikely to have been the president’s purpose.

After recapping the great events which shaped the bloodiest century in human history, Obama warned that, in the absence of resolve to meet today’s challenges head-on, the bad old days may not be so old after all.

“I come here and insist we must never take for granted the progress that is won here in Europe and around the world, because the contest of ideas continues,” Obama warned in the most important two minutes of his marathon address in Belgium.

“Russia’s leadership is challenging truths that only a few weeks ago seemed self-evident,” he continued, “that in the 21st Century, the borders of Europe cannot be redrawn with force. That international law matters. That people and nations can make their own decisions about their future.”

Turning to the apathy which may yet consign Ukrainians to fates determined by Moscow, Obama cautioned that the world may yet construe their interests “narrowly.” He observed that the global economy is not dependent on a free Ukraine and that American and Western European borders are not directly threatened by Russia. “But that kind of casual indifference ignores the lessons that are written in the cemeteries of this continent,” Obama counseled. “It would allow the old way of doing things to regain a foot hold in this young century.”

The message implicit in the president’s address is so unpopular that even he broached it gingerly: that American hegemony has yielded a peace and prosperity unparalleled in history, and we should endeavor to maintain it for as long as possible. Obama laid the foundations of an argument in favor of renewed American engagement to secure the gains the West won after the Cold War. It is a debate that will likely recur throughout the century.

But it will be up to the globe’s thought leaders to make the case that the unstable, multi-polar world which will fill the vacuum left by a retreating America will be more dangerous, more likely to draw military forces into real wars, and make it harder to preserve the unimpeded global commerce which has made Westerners so complacent today. But Obama served his history well when he laid the groundwork for that debate today in Belgium.

Watch the key moment of Obama’s address below via Fox News:

Watch the full speech below, via Fox: