The Most Popular Part Of Obama’s State Of The Union Address Was, Well, Not Very Popular At All

The Most Popular Part Of Obama's SOTU Address Was, Well, Not Very Popular At All 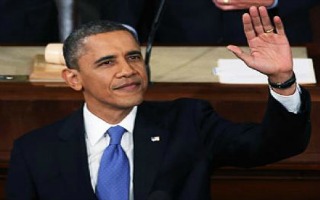 The assembled members of Congress seemed captivated. President Barack Obama’s base was positively enthralled. Surely, the most memorable portion of the president’s State of the Union address was when Obama, summoning every ounce of his considerable oratory skill, demanded that Congress put some ill-defined gun control proposal to a vote. A casual observer could be forgiven for thinking the president may have reached into the hardened hearts of Second Amendment rights advocates and made them reconsider their position. The casual observer would be wrong. According to Bing’s real-time reaction tracker, the portion of Obama’s speech in which he advocated for new gun laws was the most unpopular portion of his address.

According to Bing’s “Pulse Tracker,” which registered 12.9 million votes over the course of the speech, the point when Obama focused on gun control ranked a net -75 among all viewers. 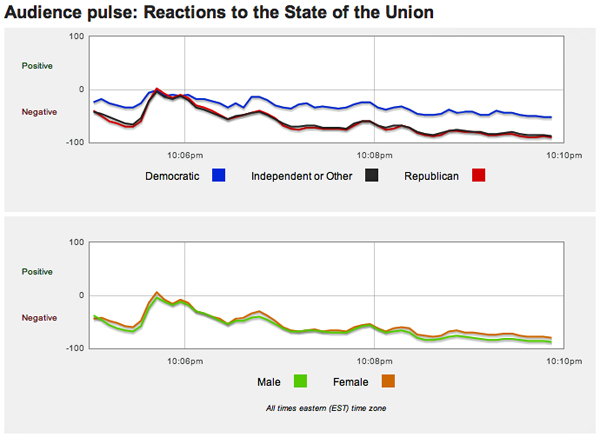 The dip is pronounced among self-identified Republicans and independents, but it is also visible among Democrats (the moderate spike among Democratic support came at the moment when the president insisted that a variety of victims of gun violence, building to crescendo, “deserve a vote” on gun control in Congress).

While this is interesting data, it is hardly scientific. The anecdotal evidence that Obama’s hectoring on gun control was intended only for internal consumption among progressives is, however, backed up by the scientific polling conducted before the speech. Polls found that new gun laws are decidedly low on most voters’ priority list.

A University of Connecticut/Hartford Courant Poll of 1,002 adults found that only 8 percent respondents wanted the president to address gun control in the State of the Union – well behind the 16 percent who wanted Obama to focus primarily on the deficit and the debt and the 44 percent who hoped to hear new proposals to decrease unemployment and foster growth in the economy. Quinnipiac University found similar results when they asked 1,772 registered voters what they wanted to hear from the president. Only 15 percent said they were listening for new gun control proposals.

Bing’s findings do not square with the CNN/ORC instant poll which found that a mind-blowing 70 percent of respondents believe that Obama’s policies on gun control would move the nation “in the right direction.” Of course, the polls partisan composition, with 44 percent of respondents identifying as Democrats compared to just 17 percnet who said they were Republicans, may have slightly skewed the results in the president’s favor.

Outside of the nation’s faculty lounges, gun control think tanks, and the offices of 30 Rockefeller Plaza, the nation’s voters are not especially enthusiastic about gun control. Like most of Obama’s address, however, this part of the speech was directed at the faithful. The president needs to rally the troops for a future characterized by legislative gridlock. This was a partisan address designed to appeal to a partisan audience, and the data backs that assumption up.