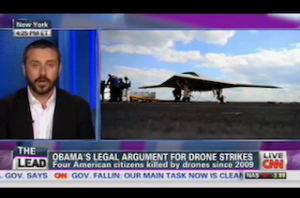 Thursday afternoon on CNN’s The Lead, following President Obama‘s major speech on counterterrorism, host Jake Tapper welcomed The Nation‘s Jeremy Scahill, who offered his reactions to the speech. Scahill, who with his book and documentary Dirty Wars

has been highly critical of Obama foreign policy did not find much hope in what the president said.

“My reaction to the president’s speech,” Scahill began, “is that it really is sort of just a rebranding of the Bush era policies with some legalese that is very articulately delivered from our constitutional law professor, Nobel Peace Prize-winning president. But effectively, Obama has declared the world a battlefield and reserves the right to drone bomb countries in pursuit of people against whom we have no direct evidence or who we’re not seeking any indictment against.”

Scahill said the he sees no scenario in which drone strikes against Americans could be reasonably justified. He pointed out that with the exception of Jude Mohammed, who was killed by a strike in Pakistan, the other three Americans Attorney General Eric Holder admitted the U.S. has killed had no indictments against them.

He singled out the killing of Anwar Al-Awlaki‘s 16-year-old son by a drone strike in Yemen as particularly “shameful” and was troubled by the use of the “Orwellian phrase that he was ‘not specifically targeted.'” He added, “That family and the American people have a right to know why this kid was killed.”

Asked by Tapper what the “most interesting” thing he found while investigating for his book and movie, Scahill pointed to the alleged use of war lords in Somalia to do the torturing and rendition that the Obama administration claims to have ended. “Obama can say we’re not running the show,” he said, “but instead they’re outsourcing and directing foreign nationals to do it. And I think that is really a metaphor for how little things have changed on this particular front.”