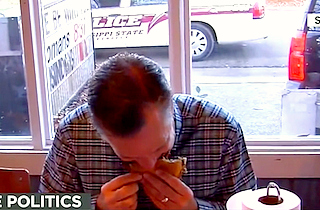 In what has to go down in the annals of Great Exhalations of Beltway Epistemological Dysfunction next to “What about your gaffes,” some political pundits are wondering if we’re seeing Mitt Romney’s attempted transformation into Woodie Guthrie after the plutocrat allowed himself to be filmed eating foodstuffs yesterday.

“One of the rules in politics, Mitt Romney said, is that you’re not supposed to let the cameras shoot you eating,” CNN’s John King explained Thursday morning over footage of Romney performing a caloric-intake operation via the mouth receptacle.

“Is this the new Romney now?” a reporter actually asked him, literally as he was taking a bite. “Eating when the cameras are rolling?”

“I didn’t know I had a choice,” Romney replied, looking as uncomfortable as that statement would lead you to believe.

Romney already is authentic: he’s a fiscal conservative who doesn’t like being filmed eating. Let’s not pretend Mitt Romney Presents Lunch on Tape changes anything.