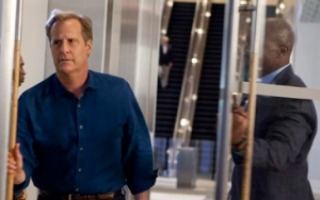 Well, it wasn’t a true Sorkin finale, since no major characters died, but Will McAvoy came close so I’m going to count it anyway. And there was a tertiary character death! It’s good to know that in life there are some things that are constant. This episode jumps all over the place in time, beginning August 8th, 2011 and flashing back to eight days earlier, when Will took too many antidepressants after reading Brian Brenner’s rather unflattering piece on his show in New York Magazine. Mac and Charlie find him in his bathroom covered in blood and rush him to the hospital, where he complains (after Mac beats him with his copy of NY Mag that everything in the piece is true, and that is why he’s so upset. In fact, he’s thinking of not coming back.

Let’s take a break from that tantalizing possibility for a second to dispatch with the insane love quadrangle (now a pentangle!) stuff that happens in this episode. Jim asks the newsroom how to learn more about “Sex and the City,” since Lisa loves the show (of couuuurse she does), and rather than telling him to watch E! weeknights between 7 and 8pm somebody suggests that he take one of those asinine bus tours with all those silly tourist ladies from Middle America who probably don’t even watch the news. Don asks Sloan for advice on how to ask Maggie to move in with him, and she tells him that she’s single because he never asked her out. I love Don, but what? Sloan’s a little out of his league for this kind of intense unrequited crushing to seem believable. I support it, though!

Instead of macking on Sloan, Don asks Maggie to move in with him after all, but not before she tells Lisa that she doesn’t think Jim was there to see her the night they got back together. Lisa storms out of the restaurant where they’re having drinks and Maggie chases after her, only to get water splashed all over her by a “Sex and the City” tour bus (just like Carrie in the credits!) causing her to unleash a rant about how “real single women in New York City” never wear heels and don’t meet their friends in the middle of the day to talk about boys, particularly when they are in love with the boy that their friend is dating. Jim pops up amid the feather boa-wearing, cocktail-sipping, giggling ladies and he and Maggie kiss. But instead of deciding to break up with the people that they clearly like less than each other, they go their separate ways because contrivance demands it. Sloan demands that Don forget everything that she told him, so we can be sure that this asinine subplot will continue in season two. I hope even more characters get looped in; I won’t be satisfied until Charlie is crying into his glass of bourbon because Gary Cooper can’t love him the way he wants to be loved after all.

To return to Will: he’s all set to throw in the towel when a nurse comes in with an odd and compelling story: her relative, who lives in Tennessee and has been voting for 75 years, has been denied the right to vote by the state because she doesn’t have a driver’s license or any other kind of state-issued ID. To the inspirational strains of “Baba O’Riley,” Will leaps out of bed and decides to keep fighting the good fight. The only possible complication is that the evil Nina Howard, who is having a bit of an existential crisis over what a horrible, awful person she is — truly, what could be worse than working for TMI? Literally nothing, in Sorkin’s universe — tells Mac that she has a source that says Will was high during the bin Laden broadcast. Mac’s poker face is terrible so Nina tells her that she’s waiting on a second source before she runs the story. As it turns out her primary source is a voicemail message Will left for Mac that night that she never got, in which he admitted he was high and seemed on the verge of professing his love for her.

Naturally, it’s the latter thing Mac wants to focus on, being a woman and all, but Charlie has his head on straight and is still pursuing the lead he got from Solomon Hancock, the NSA whistleblower, who told him TMI has been hacking phones News of the World-style. When he tells Hancock that he can’t use him as the source, because of his less than pristine record with the NSA and that one time he hired a prostitute, Hancock jumps off the Queensboro bridge in the middle of the night. Charlie clearly feels awful about this but presses on, getting Will involved in a sting operation to get Reese Lansing to admit that he hacked Mackenzie’s phone, listened to the message Will left, and deleted it, which he does almost immediately. Charlie triumphantly pulls out a tape recorder, slams it on the table and names his terms: Will gets to keep his job, he gets to keep being mean to the Tea Party, and Leona Lansing will shut down TMI. I hope Sorkin will pardon the internet parlance, but re: that last thing — LOL WUT???

It seems like Leona is on board with all of these demands, so Will does a typical “News Night” broadcast, beginning with the story of the elderly Tennessee woman who is no longer allowed to vote and ending with calling the Tea Party “the American Taliban.” Whee! If the death threat subplot didn’t pay off this season, it certainly will in the second after that! After the broadcast Will sees a young girl who is waiting to be interviewed for an internship at 11pm, inexplicably, and recognizes her as the sorority girl whose question started his meltdown in the pilot. He barges into the interview, emotionally abuses her some more, and demands that she is hired. She looks terrified, rather than psyched, as she should be. The episode ends with Will driving off into the night with his one true love Terry Crews and, presumably, shots being fired after the credits roll. See you next season! Good grief, I am going to miss this show.