The Newsroom Recap - Season 2, Episode 6 - One Step Too Many
RECAP 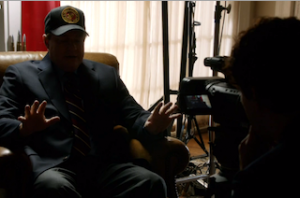 When season two of The Newsroom began, the most promising element of Aaron Sorkin’s cable news critique was the over-arching “Operation Genoa” storyline that promised to give the characters something bigger to do than just cover the daily news. There was something larger at stake for the their careers and the country. But after last week’s episode barely touched the story and ended up being the best episode of the season, that premise showed signs of crumbling. With a big return to the Operation Genoa last night, somehow it felt like more happened in last week’s real-time 60 minutes than in this week’s several months of action.

The episode opens on the “First Red Team Meeting,” in which Don, Jim and Sloane learn that their News Night colleagues have been working on this highly-classified story for the last 7 months. Of the three, Jim is by far the most skeptical–he just doesn’t want to believe that the U.S. used sarin gas on innocent Pakistanis. When the country’s torturing accused terrorists and droning American citizens, ringleader Jerry doesn’t see how this is that much a stretch.

Jim has other things to worry about anyway. He has a big date with (now-serious?) girlfriend Hallie, who’s in the city for a Mitt Romney campaign event. He got them a room at the Soho Grand (which he jokes cost him “three-year’s salary,” a disturbing near-reality). But first, they have to go out to dinner so Hallie can set up Neal with her new MTVU-reporting, Ron Paul-loving friend.

But that’s not all Jim has to contend with. Romney’s spokesperson Taylor decides to join the dinner in order to punish him for ACN’s six minutes and 20 seconds of Etch-A-Sketch coverage. After spending more of dinner complaining the the media takes everything her boss says out of context, she reveals she’s been just been fired by the campaign for suggesting Romney “get his message out” to networks other than Fox, among other things.

Jim is almost home-free when he and Hallie run into Maggie, who just happens to be drinking alone in the Soho Grand bar. Jim has to awkwardly say hello before going up to the romantic, candle-lit hotel to “help Hallie with her computer.” The couple is seconds away from sealing the deal when Hallie finds out she needs to be on a plane to Colorado in 90 minutes for another Romney event. And now they don’t even have Taylor to blame. This gives Jim to opportunity to return to Maggie in the bar for some late night sexual tension. But she’s on her way out, with the bartender.

But on to the meat of the episode. Charlie and Mac go on a field trip to find a general who might know more something about Genoa. Played by Stephen Root, of Newsradio and Office Space (“Where’s my stapler”) fame, the general is obsessed with March Madness and may or not be completely senile. But Charlie blurts out, “We know about Genoa” anyway just to see where it goes. Could this guy be the whisteblower who helps them nail-down this story for good?

A clearly over-eager Jerry returns to interview the general, who’s so paranoid (and sexist?) that he won’t even let Maggie stand in the room. Jerry does the best he can–grilling the general for a few minutes and jumping way too quickly to the sarin question–but the most he can get is this: “If we used sarin, here’s how we used sarin.” Whether he intended it or not, the general made it excessively easy for Jerry to return to ACN and egregiously edit his words into, “We used sarin… Here’s how we used sarin,” even going to far as to erase the raw footage for good. It’s a damning piece of seriously manipulated tape, and not of the rushed-for-time George Zimmerman 911 call variety. But it’s not good enough for Charlie, who wants another witness.

This leads to a showdown that conservatives probably thinks happens all the time when one Obama-skeptic enters a liberal “mainstream media” newsroom. “Your problem is that you like him. You like this president, you trust him,” Jerry says in an outburst to the News Night team. “What the fuck is going on?” Of course, in this case, Jerry evidently trusts the president so little that he is forced to manipulate the video to better prove his point.

Sorkin fast-forwards through much of 2012, with a montage of Will reporting over everything for the Chick-fil-A controversy to the Supreme Court’s Obamacare decision to Romney’s choice of Paul Ryan as running mate. Eventually we arrive in the present, with Charlie telling the lawyer Rebecca how he found out his big “problem” during the Sunday night special report on Operation Genoa: “None of it was true.”

One of the main problems with this episode, and the Operation Genoa storyline in general, is how little it gives the show’s alleged main character, Will McAvoy, to do. Presumably, he will be brought into the fold eventually as the anchor who’s forced to deliver the false news to the public, but for now he’s purposely being left completely out of the loop and it doesn’t appear to be helping anyone.

Last night’s episode isolated Will from the other characters as he participated in the somewhat embarrassing activity of running his own focus group on himself. His girlfriend/gossip columnist Nina Howard is giving him tips on how to make his broadcasts more “folksy,” with her main advice being to go on the morning shows, in this case the fictional ACN Morning. Anyone who saw Joe Scarborough on The View last week knows how awkward it can be when a “serious” news person tries to lighten it up.

Will is decidedly not a fun morning show guest, immediately regretting his decision when he’s forced to pull a Michael Dukakis and wear a football helmet on screen. When he finally gets out of there, he decides to break up with Nina for making him care about how much people like him. Will McAvoy is a vain, petty, often ridiculous character. But if this is all the show is giving Jeff Daniels to do, then it’s seriously underestimating its star. We can only hope that Will gets welcomed back into the fold in future weeks.

There’s really only one other thing you need to know: