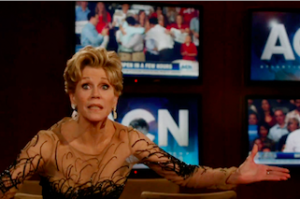 My guess is that there’s very little overlap between viewers of HBO’s The Newsroom and the MTV Video Music Awards. For all its faults, watching the News Night team struggle to get their bombshell story right has a kind of quiet dignity that an NSYNC reunion never could. Last night’s episode was the climax of the Operation Genoa episode, in which everything that could go wrong went wrong and Jane Fonda was forced to come in and clean up the mess.

In his big meeting scene with Rebecca, Don reveals that it’s Jerry Dantana suing ACN for wrongful termination, not the U.S. government suing them for defamation. He’s claiming he’s a scapegoat, but Don points out that he took “pruning shears” to the major interview. Cut to the third red team meeting, “Red Team III,” where the team tried to poke holes in Operation Genoa, and where Charlie ultimately green-lit the story. Jim, Neal, Sloane and the rest tell the lawyers what happened as we flash to clips of the team reviewing the whopping six pieces of evidence, including the falsified interview, which conspicuously features a basketball game screen visible in the background.

Seconds after Charlie gives the go ahead, we’re live with the special edition of ACN Reports: Operation Genoa. You can almost see the knot in Jerry’s stomach when the Frankenstein-ed “We used sarin” clip airs. Within a few minutes, Charlie gets a call from the general who says he never said that. “A weapons expert wants to kill me.”

On top of the general’s denial, one of their other sources, another source, Eric Sweeney, accidentally admits that he has a “traumatic brain injury.” Mac is starting to worry that she led the third witness, Valenzuela, to his conclusion. And craziest of all, Charlie’s source made the whole thing up because he son was fired from ACN and later died of a drug overdose. If you hold the helo manifest over the light for a few seconds, the words “Fuck you, Charlie” appear. All of a sudden, their rock-solid story is a complete mess.

But before that, there’s a new story creeping up on the team, one they almost had before anyone else. It’s September 10th, 2012 and they’re looking at screening of a film called “Innocence of Muslims” that could cause a stir in some corners of the globe. That’s right, it’s Benghazi time. Like the rest of the media world, not to mention the Obama Administration, the team conflates the demonstrations in Cairo, Egypt over “Innocence of Muslims,” with the attacks on the U.S. consulate in Benghazi, Libya. Will’s the only one who knows it’s a 9/11 anniversary attack and has “nothing to do with Cairo.” But they’re all too busy with Operation Genoa fall-out to report it that way.

Credit goes to Mac for thinking of the basketball shot clock to check on Jerry’s footage–after Will explains to her how all sports work. Once she verifies what happened, she pushes Jerry into an elevator and fires him.

Just when you thought this episode wasn’t quite delivering the goods, Fonda waltzed in the room wearing her best gala attire, ranting about Daniel Craig and refusing to accept the resignations of every member of the News Night team. Charlie may think they’ve lost the trust of the public, but Fonda’s Leona Lansing doesn’t seem to give a shit. She doesn’t like to lose and is looking forward to showing off her courtroom outfits. Despite my best intentions, I’m looking forward to it as well.