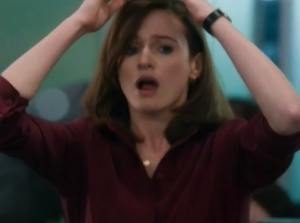 Oh boy, The Newsroom. I still love you, against all of my better instincts, but that was rough. Here’s what went down this week:

We get a glimpse at Will McAvoy’s douchey apartment this week (guitars everywhere!), but that’s a footnote, as is Will for most of the episode. The focus is on Mackenzie MacHale’s mission to rebrand the show “NewsNight 2.0,” a very web-y reference for someone who can’t figure out how emails work, which is a major plot point this week. You see, Mackenzie, in addition to making sweeping changes to the show, is also extremely eager for some reason to convince the staff that Will is not “an arse,” a goal made more difficult by the pervasive rumor that he cheated on her while they were dating.

This nugget of information is delivered to Mackenzie by Olivia Munn, who plays a financial reporter named Sloan Sabbith who Mackenzie is hoping to draft for “NewsNight 2.0” to do a nightly financial analysis segment. Sloan is humbled by this request and recommends several of her professors who might deserve the spot instead, but that won’t work, Mackenzie tells her, because “they don’t have your legs.” Oh, barf. In addition to thinking she invented the trope of “hot lady reading the news,” Mackenzie also asks Sloan to help her kill the rumor that Will cheated on her, because that is definitely of interest to all them professionally, I am sure. Later we find out that it was actually Mackenzie who cheated on Will, which made her realize that she was in love with him, so it could hardly be called cheating! That is not recognizable human behavior.

The topic for the show in this episode is S.B. 1070, the racist immigration bill passed by the Arizona state legislature and signed into law by Governor Jan Brewer in the spring of 2010. While that is certainly ripe for a lot of scorn, there are also a lot of potshots taken at the Arizona Cardinals which I, as a Phoenix native, did not appreciate. The Cardinals are fine; leave them out of it! Allison Pill is given the important task of getting someone from the governor’s office (maybe even the governor herself?) to appear on the show to defend the bill. She screws it up because her contact in the governor’s office is a dude that she dated very briefly in college (what! a! coincidence!), and she said something snarky to him about their history when they spoke on the phone, and now no one from the governor’s office will appear on the show. This gets her reamed out, albeit charmingly, by the senior producer who has a crush on her. She ends the night miserable, drowning in a martini at a karaoke bar, and breaks up with her boyfriend, the other producer who’s a total jerk, and getting sent home by the senior producer who has a crush on her.

So, the show: Mackenzie makes the excellent point in a morning meeting that sometimes there are not “two sides to every story,” that there can be more sides or fewer sides than two. With Jan Brewer no longer on the table Will is forced to interview a pageant queen (sure), a gun nut and a local racist (who refers to immigrants as “los illegatos”) in a segment that quickly devolves into theater of the absurd. Then, because he has been instructed to do so by a completely horrible ratings guy, he airs a clip of Sarah Palin commenting on the bill that is completely nonsensical and indefensible, and translates her points for her because the ratings guy told him that would play well with Republican viewers. It’s not an entirely ridiculous impulse, I suppose, but the way he handles it is so slavish and obviously pandering, that it doesn’t seem like it would be taken seriously by anyone watching at home.

Mackenzie is furious that Will brought Palin into the show at all, demanding to know if he is “in or out,” meaning on board with “NewsNight 2.0” and really willing to give up the inoffensive blandness that has made him so popular. After spending some more time in his dark, douche-y apartment, Will calls her and tells her he’s in after all.

The worst part of watching this show is that, after writing down all of these complaints, and cataloguing the many ways in which the female characters screw up personally and professionally over the course of this episode, I still liked watching it. I like the rhythm of the banter, I like the actors, and I like a show whose thesis is “there are not always two sides to every story.” But why oh why can’t we have a spazzy male character, or a hyper-competent female character whose hotness does not need to be remarked upon, so that I can feel better about watching and liking the show, and not like I am being Stockholm Syndrome’d into liking it because I like seeing people speak beautiful sentences back and forth to each other very quickly?

I can’t quit you, The Newsroom, but I am not happy about it.