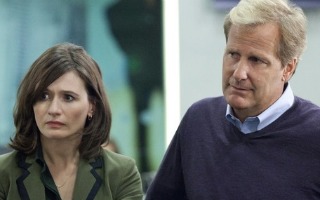 We pick up right where last week’s episode ended, with a blackout derailing the pre-taped interview Will was set to do with one of Anthony Weiner’s sexting ladies. MacKenzie makes a big speech about how this is a blessing in disguise, and rather than talking to horrible women who sext and like being on TV, now “News Night” can film that night’s episode outside, with the people, and by the time she’s worked herself up into a real lather over this outdoor newscast idea, the power comes back on.

The production staff is supposed to be doing more debate prep, but instead they are dejectedly watching the Weiner coverage with devastated expressions. The only person with the fortitude to go on is Neal, who is still trying to get Sloan on board with his undercover trolling mission. Why does it have to be Sloan? Is she just the easiest character for whom Sorkin can come up with horrible insults? If so that’s a failure of imagination on his part, since Sloan is probably the least terrible member of the cast.

The team needs a unique guest for their continuing Casey Anthony coverage, and surprise! Someone has a connection! As it happens, Maggie’s roommate Lisa went to high school with her. She has no interest in participating in this three ring circus, but that doesn’t stop Maggie and Jim from going to the store where she works and making it impossible for her to do her job. Even though Maggie is horrible to expect Lisa to do her a favor after all of the rotten things Maggie has done to her over the past year, Jim walks away easily with the Worst Person In A Scene Award, thanks to lines like “If I were a woman I’d spend the whole day kissing other women.” Lisa eventually agrees to do it, because Maggie is her only friend.

Back at the studio Will has taken custody of some flowers that were sent to Don by a woman he dated during one of his and Maggie’s breakups. It seems awfully weird that a woman would send him flowers at work for no particular reason, regardless of their relationship, but Will and Jim, who signed for the flowers, cover for him. When not adhering to Bro Code and covering for Don’s secret flowers, Jim is vetting the NSA mole who met with Charlie last week, who is not what one might call an unimpeachable witness, due to his predilection for spying on his ex-wife/occasional hiring of hookers. Mac still wants to use him. The storyline gets put to rest here, sure to come back to haunt us all in the finale.

Lisa shows up for her interview, and is given some statistics on missing/murdered children so she can give her own patented “News Night” smug speech about What Really Matters Here. She does, but then she gets a little too opinionated (it’s a delicate balance, ladies) suggesting that none of this might have happened had Casey Anthony been able to prevent/terminate her pregnancy. Some crazy person finds out where she works and spray paints “BABY KILLER” on the door. In Manhattan? I don’t see it. Maggie, Jim, and even Will, emerging hilariously from the suspiciously misty streets, come to comfort her.

We finally get to see all this debate prep pay off, sort of, when Will welcomes two RNC operatives to the studio to see the new debate format. Everyone is in their coolest gray candidate sweatshirts for the occasion. The new format, says Will, is that he “question[s] them until [he’s] done,” and he proceeds to rake each candidate over the coals until the younger RNC guy demands that he stop. Young RNC guy basically asks “Is this a joke?” while older, wiser RNC guy who is played by Adam Arkin and is a friend of Will’s is into it, because whichever candidate can handle “a cross” will see a huge bump in the polls the next day.

“Will McAvoy is not the only anchor at ACN!” younger RNC guy says, sensibly. He offers the debate to Don, for Elliot, and rather than taking it, as he absolutely should have done, Don tells him “Eat me.” Professional. He offers it to Sloan; she tops Don with a “fuck you.” People are so loyal to Will. I really wish they’d give us a reason. The RNC guys leave. “We lost the debate,” Will says sadly. Oh, brother.

Brian tells Mac he thinks Will is going to cave on the debates, just like he did on Casey Anthony. Mac says Will is too smart for that. Will falls out of his office with no pants on. Literally, that’s what happens. Once he recovers from that he tells Sloan she can have the extra time she wants to talk about the debt ceiling. It’s time to bring back “News Night 2.0″…again. “I can’t live with a fifteen year old girl being the toughest guy at my desk,” Will says, referring to Lisa. Yes, God forbid.

Despite his best misogynist efforts, Neal is still not being accepted into the elite trolling society. Sloan makes a comment about how it’s too bad he’s not the guy who sent the death threat to Will. Dev gets An Idea, so that will clearly come back in the finale as well. And if it’s a true Sorkin finale, someone is going to die! I hope it’s Maggie, but it will probably be Terry Crews. At her apartment Maggie tries to convince Lisa, again, to go out with the guy that she likes. Jim shows up at the apartment, having gotten a pep talk from Mac, but before he can confess his love for Maggie Lisa intercepts him and he just….goes along with it. Gross! Don feels guilty about his secret sexy flowers, and it looks like he confesses to Maggie. We won’t know for sure until next week! I am going to miss this show. Where will I get my weekly dose of absurdity when it’s over?