The Newsroom Recap: The Debt Ceiling Ain’t Got Nothing On Casey Anthony

The Newsroom Recap: The Debt Ceiling Ain’t Got Nothing On Casey Anthony 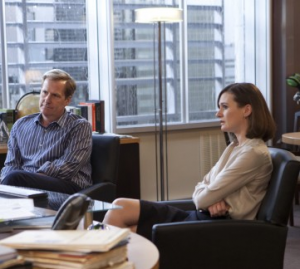 First things first: in this two part episode, called “The Blackout Part I: Tragedy Porn,” Will McAvoy invites a writer from New York Magazine, who used to be a big deal at Time but is now a lowly blogger, to do the story on “News Night 2.0” that the press has apparently been clamoring for. While he explains this to the reporter, whose name is Brian Brenner, we get a taste of Will’s bizarre disdain for print media, but that’s not what’s most important about Brian Brenner. It turns out he is MacKenzie McHale’s ex-boyfriend — the very ex-boyfriend with whom MacKenzie cheated on Will, and Will knows this, and still wants him to do the story. Confused? So is Will’s therapist.

The more pressing concern at the office is that during a week when the show studiously avoided covering the Casey Anthony trial, half their viewership abandoned them in favor of Nancy Grace on HLN. Reese Lansing makes it clear that all their grandstanding about changing the conversation is going to have to be set aside for a while until they can get people to watch them again. Mac is super mad, but Will is rather sanguine about it. He’s playing a long game: his ratings have to be up so they can successfully nab one of the presidential debates, and CHANGE THE WAY WE THINK ABOUT PRESIDENTS AND DEBATING FOREVER.

To this end, the junior staff is holding a bunch of mock debates pretending to be the various Republican candidates so they can figure out which are the best “Gotcha!” questions. This gives Maggie the opportunity to go on a self-serious rant about how Michele Bachmann is insulting her Christian faith by claiming to speak directly to God, a rant that she interrupts her bosses and holds up a meeting to finish. Fire Maggie!

In a totally separate subplot, Charlie Skinner meets Late For Dinner, his mysterious NSA informant, at the New York Public Library, who strongly suggests that TMI has been doing the same shady wiretapping and computer monitoring that recently got News Of The World in so much trouble. He tells Charlie that they’re doing it to Will, and that knowledge of it goes as high as Reese Lansing. Charlie takes this information back to Will and MacKenzie, who enlist Jim to dig up the rest of the story without tipping the NSA off to their whistleblower. Will is already way ahead of Charlie, it seems, feeding Brian Brenner just enough information to allow him to guess that Will suspects that Leona Lansing is behind the negative coverage of him in the gossip press. Charlie has a scene with Leona where he yells at her about going after Will without alluding to what’s going on…to protect her? It’s unclear.

MacKenzie makes a big show of crossing a bunch of boring policy stories off the white board to make room for their Casey Anthony coverage. “War On Drugs A Failure?” That story is evergreen, and about 20 years old. She enlists Don’s help in explaining what’s so darn addictive about Nancy Grace’s Anthony coverage: cute photos of Caylee, pictures of Casey Anthony’s back tattoo, instant replay-style courtroom footage — and the “News Night” team recoils like they’ve never seen anything like this in their lives. “No one ever went broke serving up a woman who makes other women feel superior,” Don says, which I think is Aaron Sorkin’s version of a feminist argument but is still offensive. Will does fifteen minutes of the show on Anthony and they get about 150,000 viewers back, mostly women. Those shallow, bloodthirsty morons.

There are a few other stories that get set up in this episode, likely for use later in the season. The first is that Sloan Sabbith keeps begging Mac for extra airtime to talk about the vote to raise the debt ceiling, which became an enormous partisan battle beginning in May 2011, when this episode takes place. Mac sympathizes but doesn’t have much spare time to give her, what with all the Casey Anthony-ing going on. Sloan yells in frustration that the People Need To Know, but she doesn’t get any additional minutes on air this week. Neal Sampat also approaches Mac about an exposé on internet trolling, which means he’s going to have to go undercover and troll someone connected with “News Night.” When he asks Sloan if she’d mind if it were her she body-slams him into the nearest wall, and then does it again when he implies that she has a big ass. This woman has two Ph.Ds, we are asked to believe.

MacKenzie’s job gets even harder after the Casey Anthony business, as Anthony Weiner’s Twitter account mysteriously sends a crotch show to his thousands of followers, and “News Night” feels obligated to cover that story too, to prevent people from claiming they only go after Republicans. Maggie is tasked with dealing with one of the women with whom Weiner had lewd online conversations, who is there ostensibly to “show the world the kind of person he is” but very obviously wants to be a star. They decide to pre-tape an interview with Will, but before we get to see him most likely lose his cool and berate the young woman on the air, everything grinds to a halt because there’s a blackout. Whoops! Wouldn’t a news network building have a backup generator? Answers to that question and more will have to wait until Part II.