The Newsroom Recap: I Have No Idea How To Feel About The Newsroom
Video 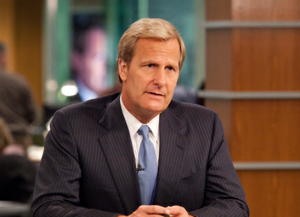 I’m a huge Aaron Sorkin fan — I spent a solid amount of last Friday night reciting the lines to A Few Good Men along with Tom Cruise, I loved The West Wing and The Social Network. But like all right-thinking people, I couldn’t stand Studio 60 On The Sunset Strip and was nervous when I started to read the bad reviews of The Newsroom. They seemed to suggest that the show was just Sorkin at his very blowhard-iest, and after seeing the pilot I have to conclude that they’re not wrong, exactly. And yet, I still found myself enjoying the show? It’s a very confusing position to be in.

The episode opens with Will McAvoy’s (played by Jeff Daniels) rant at a college student who asked him to come up with a single sentence explaining why America is “the greatest country in the world.” He thinks (?) he sees Emily Mortimer hold up a pad of paper that reads “IT’S NOT” followed by “BUT IT CAN BE,” and he loses it. The speech that follows is classic Sorkin, in its rapid-fire recitation of statistics (fun!), and it’s patronizing referral to the student as “Sorority Girl” (boo), and even though it’s nakedly manipulative I still sort of liked it. I’m a sucker for a good rant.

If only that were the only rant in the episode! Unfortunately we get another one almost immediately when McAvoy gets back from a mandatory vacation in St. Lucia with Erin Andrews (LOL, whaaaaat) to find that his executive producer and a sizable chunk of his staff are jumping ship to a later news show. Only his loyal assistant — actually just an intern whom he mistook for his assistant, that loveable jerk — and Dev Patel, who McAvoy refers to as “the tech guy” because he is a little casually racist (Patel actually runs his blog, so then we get a lot of “I seriously have a blog?????” lines because the internet is imaginary), remain.

Emily Mortimer to the rescue! She’s back from several years in Peshawar, and in need of a job, so she is hired by Sam Waterston, who plays McAvoy’s boss and whose toupée is flourishing on a steady diet of scenery chewing. She promotes McAvoy’s assistant to associate producer immediately and then goes to fight with McAvoy in his office for a while, because they have a romantic history and he didn’t know she was being hired. While this is happening news of the 2010 BP oil spill is breaking, and Emily Mortimer’s senior producer (played by Broadway veteran John Gallagher Jr., who is adorable) gets into a pissing contest with the EP who is leaving about whether or not to interrupt the fight in McAvoy’s office.

Eventually the senior producer prevails, because he has two sources that are willing to confirm how terrible the spill actually is — his college roommate, who works for BP, and his older sister, who works for Halliburton. How conveeeeenient. Everyone gets into show mode, with Emily Mortimer directing the proceedings and demanding that McAvoy show her a modicum of respect during the hour that the show is on the air. In addition to the sources they already have, the new associate producer tracks down an inspector for the Minerals Management Service, who was just out of training and responsible for the safety of hundreds of wells, and who inspected Deepwater Horizon mere weeks before the spill. It’s a great scoop, made even greater by the fact that none of the other evening shows jumped on the spill the way McAvoy’s show did — they were covering dumb stuff like the iPhone prototype that got left at a bar — but they all closed with the spill when they realized the severity of the situation.

At the end of the episode, as Will and Emily Mortimer are leaving, they have a conversation that reveals that they used to date pretty seriously, but it ended (obviously, and badly) under mysterious circumstances. Or maybe not that mysterious, since they both seem like egomaniac control freaks. He also tells her that the reason he lost it at the Q&A was because he “thought he saw her,” so he might also have some kind of brain thing going on. But when Will takes the elevator, Emily Mortimer calls after him, and we see that she kept the sheets of paper reading “IT’S NOT” and “BUT IT CAN BE”, so who knows what’s real and what isn’t. Maybe we’ll find out she was a figment of his imagination the the whole time.

So. I liked the “let’s put on a show” element to the episode, since that’s a TV trope that is nearly always exciting. I’m apprehensive because Studio 60’s pilot had a similar arc, and we all know how that show turned out. Even when Sorkin is writing nonstop rants the quality of the scripts, how rhythmic and fast and theatrical the lines are, is still seductive. But the pilot felt like the lights were on but nobody was home, I think in part because quarterbacking the way the media handled the BP oil spill is a little too easy. Of course this show would get it right, because we all saw it unfold in real time, and so did Sorkin, and so naturally Will McAvoy and Co. would handle it perfectly/recognize the magnitude of the event. It felt a bit cheap. Then again, as has been pointed out online, plenty of people thought there were plenty of things wrong with The West Wing pilot, and I spent my formative years wanting to be C.J. Cregg when I grew up. And in all honesty, the pilot isn’t as bad as I was expecting, given how bleak the initial reviews were. I’m willing to give the show a few more chances to hit its stride before I give up on it. In the meantime, you can see the season one trailer below, via HBO: