The Newsroom Recap: ‘When We Called Them The American Taliban, They Minded’ 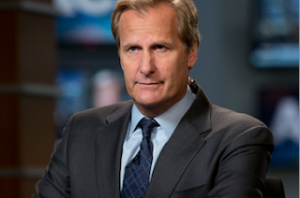 Starting this week, I’m picking up where Sarah Devlin left off, recapping season two of HBO’s The Newsroom. I’m looking forward to filling our readers in on everything’s that happening on the show that I and so many other members of the media spent last summer love-hating on a weekly basis.

Season two of The Newsroom opens with Jeff Daniels‘ Will McAvoy at the center of a very serious meeting with a very serious lawyer named Rebecca Halliday played by one of the two new members of the cast this year, Marcia Gay Harden. The scene is set in the show’s “present day,” which, given the Mitt Romney/Hurricane Sandy references appears to be late October 2012. The fictional News Night on ACN (parent company AWM) is facing a libel suit for a special they aired on Operation Genoa (not Geneva) that suggested (falsely) that the U.S. military used sarin nerve gas in Pakistan.

According to Rebecca, the real trouble began when Will called the tea party the “American Taliban” (in last season’s finale), a move that not only pissed off conservatives in the alternative universe of The Newsroom but also the real-life hosts of Fox News’ The Five. This leads to the first of a season-long series of flashbacks, beginning in August 2011 when the president of AWM, Chris Messina‘s Reese Lansing was denied entry to a House hearing on SOPA, an issue on which the media network has considerable interest. As Reese puts it, “it seems like when we called them the American Taliban, they minded.” Sam Waterston‘s Charlie Skinner takes a slightly different approach, delivering his first f-bomb on the new season: “Fuck ’em.” Despite that initial dismissal, Charles decides to punish Will by pulling him from the 9/11 10th anniversary coverage.

Emily Mortimer‘s executive producer MacKenzie Morgan McHale, widely considered the most troubled, and troubling character from the first season due to her appalling lack of competence when it came to executive-producing cable news, does get a chance to shine early in the new season by expertly smoothing over two near-catastrophes that most News Night viewers probably never would have noticed during a story on Dominique Strauss-Kahn‘s extra-marital affair (talk about a 2011 story nobody cares about/remembers anymore).

Charlie is back to his “sexual-harassy” repartee with with Olivia Munn‘s Sloane “Money-Skirt” Sabbith, who is on a mission over drone attacks long before Sen. Rand Paul (R-KY) made it a national issue with his 13-hour filibuster. In a similarly prescient move, Dev Patel’s Neal Sampat has a hot lead on something called “Occupy Wall Street” that he think might just turn into “America’s Arab Spring.” While MacKenzie isn’t quite ready to put the nascent movement on the air, she does encourage him to check out the next “general assembly” meeting, where Neal begins to win the trust of a cute, young, media-averse Occupier who opens his ideas to the evils of Wall Street.

Also back in 2011, the love triangle centered around Alison Pill‘s Maggie Jordan remains alive and kicking with Thomas Sadoski‘s Don Keefer firmly in the picture and John Gallagher, Jr.’s Jim Harper on the outs and frustrated enough with the situation to volunteer for a position on the Romney campaign bus. Of course, because of the whole American Taliban thing, Jim ends up following behind the bus, forced to pay the $4.50 per gallon or whatever “Obama’s got it at now” as Romney’s press rep jokes. But, by the end of the episode, Don walks out on Maggie after he discovers a mysterious YouTube video, hilariously titled “Another New Yorker Loses It,” of her professing her love for Jim. We get a quick glimpse of present-day Maggie, who’s not looking so good. As Will says, she went to Uganda for a story where things “got real very fast” and she “came back a little messed up.”

Meanwhile, replacing Jim as senior producer is an ambitious upstart from Washington named Jerry Dantana, played by the other, welcome new member of the cast, Hamish Linklater. Jerry jumps in to the fray by insisting his hard-liner military analyst Cyrus West make his News Night debut for a panel on drones. When Will ends up giving Cyrus the last word during the live panel, Jerry promises to look into “Operation Genoa” with Cyrus’ help. Was Will just “getting out of the way” as Charlie suggests or trying to make for his American Taliban comments by, as Sloane says, “make sure it was clear that ACN is anti-terrorist?”

Towards end of the episode, Will and MacKenzie were using The Who’s “You Better You Bet” to hash out the drone debate and their own sorted history in their neighborhood bar. And their screwball banter was going so well until, in the same breath, Mac insisted on paying for her own drink and admitted she’d left her purse at the office, essentially erasing all of those independent, professional strides she’d made earlier that day.

In the final scene of the premiere, we were back in the room with lawyer Rebecca, this time with MacKenzie, who reveals that News Night averages about 1.5 million viewers a night, putting it well behind Fox News but well ahead of everyone else. The “Operation Genoa” episode had 5.5 million, blowing away Bill O’Reilly and becoming the most-watched cable news program of all time. Even more shocking: we learn that Rebecca’s rate is $1,500 an hour.

So, after episode one of season two, has the love-hate balance shifted at all? The over-arching storyline of the libel suit seems set to give the season a gratifying (though flashback-heavy) structure that was sorely missing from season one. With “Operation Genoa” creator Aaron Sorkin has created a clever way for the show to tackle an essentially fictional story among the recent-past reality of Romney, Occupy, drones and more. And I even found myself laughing out loud a few times (with, not at the show), which has to be a good sign. See you next week.

Everything else you need to know…